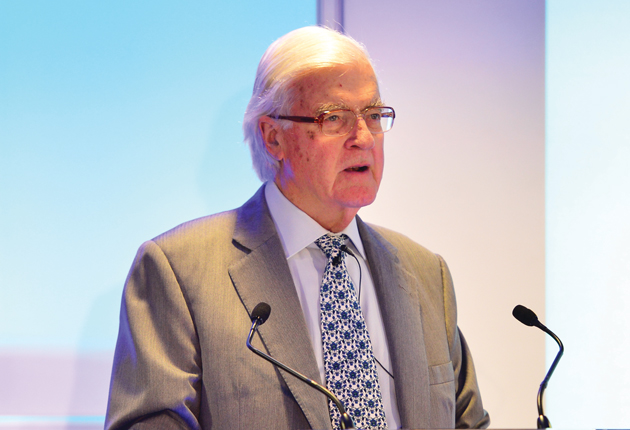 The number of jobless young people is as its lowest level in five years, but at the Youth Employment Convention it was a pressing issue that was still very much on the agenda.

The latest statistics show the number of 16 to 24-year-olds not in employment, education or training (Neet) fell by 48,000 to 868,000 in the first quarter of 2014 but, Lord Kenneth Baker said in his keynote speech, this wasn’t far enough. The target for the UK education system, he said, should be that no one should leave to become unemployed.

“We have nearly 900,000 young people unemployed who have undergone 11 years free, state education and they cannot find a job — that is a national disgrace.”

He added there was a “skills mismatch” “There is a huge shortage in our economy for skilled workers — we’re going to need nearly a million SET professionals at degree level, 450,000 at levels three and four.”

Part of the solution to the problem, he said, was to engage with students about their career choices at a younger age.

He pointed to his University Technical College project, where students are recruited at 14 to start a specialist technical education alongside core subjects such as maths and English.

“We found by 14, youngsters know where their interests lie, and they’re quite capable as to making the decision as to which range of studies they wish to pursue,” he said.

However, the type of careers advice given to young people is important, according to Jigar Patel, principal at consultancy firm McKinsey and Co, which has carried out research into the transition between education and employment.

“The most effective services are where employers come in and do things like mock interviews, face-to-face discussions and mock assessments centres,” he said.

“In places where that existed there was a direct correlation with the number of people that were then unemployed after six months — there was no one.”

Mr Patel was joined in the session by chair of the House of Lords European sub-committee internal market, infrastructure and employment, Lady O’Cathain.

“In February 2014 the seasonally adjusted youth unemployment rate across the 28 member states stood at 22.5 per cent, more than double the overall rate of unemployment,” she said.

“I personally believe the challenge has been totally underestimated, because the psychological and social implications for young people who are left without any respect and no hope and really quite disastrous.” She argued that the UK should be prepared to learn from other countries.

“No country has the monopoly on good ideas,” she said, pointing to youth guarantee schemes where young people are guaranteed a job or further training after four months of unemployment.

“Finland has such a scheme which has been put forward by commentators as the reason for its low unemployment rates.”

She also called for young people to be consulted about issues which affect them — an idea taken up in the final event of the convention, a youth delegates panel, where several current and recent learners told Labour MP Rushanara Ali, Lady O’Cathain and Lord German, co-chair of the Liberal Democrat parliamentary committee for work and pensions, what they wanted to see on the political parties’ 2015 election manifestos.

Many of them called for improved careers advice at school and beyond, and more work experience.

Panel member Armend Jashari said: “The main problem I had was that I wasn’t really employable, some of the things missing were communication skills, teamwork skills, presentation skills that kind of thing.

“One of the main things missing in schools is that practical side of recruitment, that’s an issue that needs to be addressed – we need more structured work experience.” “That’s not enough, they need a continuous exposure to the world of work and that require proper support proper careers guidance.”

Closing the conference, Dave Simmonds OBE, chief executive of Inclusion, warned that the latest unemployment statistics might not give the full picture.

“Those unemployment figures will continue to tip down over the coming months,” he said.

“But the plain fact is, that even before the recession the levels of youth unemployment were too high and in fact going up, so there can be and should be no complacency.”

“Whatever happened to the Heywood report?” asked Tony Wilson of Inclusion (pictured), during a breakout session on the youth employment challenges the next government will have to tackle.

Mr Wilson was complaining about the number of defunct employment initiatives started over the last few years — an issue Deputy Prime Minister Nick Clegg announced in September he would be tackling, by asking Cabinet Secretary Jeremy Heywood to conduct a review.

However, the report failed to materialise, and an FE Week investigation has revealed it may never be published — in fact, it may not exist at all in hard When FE Week asked for a publication date in February, a spokesperson for Mr Clegg said: “The review was an internal review and was not intended to be published.”

Following this, FE Week submitted a Freedom of Information request, but was told: “The information… is not held by the Cabinet Office.”

When we asked for extra clarification, we were told by a spokesperson: “Nothing has been written down.”

VOICE OF A LEARNER

Ben Prayel, studying for an HND in media production at Barking & Dagenham College, as well as running his own film production and photography business, took part in the Youth Delegates Debate at the Youth Employment Convention on Wednesday, May 12, where the panel discussed: “It’s 2015, what would young people want to be promised in the election manifesto?”

“I would certainly be looking for the government to improve careers advice, especially for teenagers. It also needs to be advice which is linked to what’s happening in the local, regional and UK job markets. I would also call for more to be done to encourage companies to take on apprentices.

I would certainly be looking for the government to improve careers advice, especially for teenagers

“At 16, straight after school, I spent two years on a full-time carpentry and joinery course and my next step was to find an apprenticeship, but there just weren’t any around so I had to start again.

“I was really good at Theatre Studies at school at got the best possible grade, but no one at the time suggested video and film production.

“I came to Barking & Dagenham College really by chance, but it has been a fantastic experience because it has given me a real work experience — I’ve been able to set up my own business and have had so much help from the tutors. My friends at university on similar courses haven’t had anything like the positive experience I have had.

“My other request is for university tuition fees to be reduced or at the very least held at the current rate.”