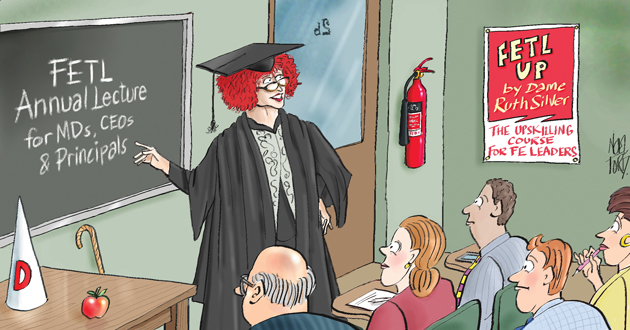 Dame Ruth Silver is making her FE and skills return with a new sector leadership thinktank funded by money left over from the Learning and Skills Improvement Service (LSIS).

The Further Education Trust for Leadership (FETL) has a budget of up to £5.5m from LSIS, which counted Dame Ruth as its chair until it ceased to exist last July.

The former Lewisham College principal is FETL’s founding president and said that although many LSIS functions were transferred to the Education and Training Foundation (ETF), LSIS board members had identified the need for a thinktank.

She said: “I think the assumption was that the LSIS work, staff and money would transfer over to the ETF.

“Because the ETF had had difficulty recruiting a permanent chief executive and chair, and because the word then was that it only had two years of funding, we couldn’t transfer the money.

“So we started to look around and the
idea of an independent thinktank for the sector came up.”

According to an FETL policy paper, among its possible “distinctive activities” were sponsorship of an annual lecture on FE leadership; and the funding of an academic chair at a university to bring “stature to the sector”.

It could also “promote and disseminate” a body of knowledge about leadership theory and practice in the FE sector.

Dame Ruth said FETL’s work would start with an invitation to those who wanted to carry out research, with a sub-board dishing out fellowships, grants and bursaries.

She said: “The idea is we will publish invitations in September to ask people if there is anything they would like some time off to research.

“We will then send these scholarships and we will fund their research and a website where all the papers will be published, and have an annual lecture from a thinker on leadership.”

But she insisted that FETL would not necessarily become a permanent organisation, but that it could merge with the ETF or another organisation following a review in two years.

She said: “It’s about getting the sector to think about its own agenda and its own pre-occupations, and in two years we will ask ‘is this working? Should this be placed elsewhere?’ We have absolutely no agenda around keeping it as it is.”

David Russell, ETF chief executive, said: “We have been in discussion with FETL about how best to align our work. Quick convergence is obviously the most efficient and effective option, but it is perfectly sensible for FETL to set up as an independent fund this year as they have a mission which is outside the ETF’s core priorities as set by our board and informed by the sector.

“In the short to medium term though, both ETF and FETL agree that convergence is the most sensible route and we will continue discussions with them about how best to implement that.”

Dame Ruth said FETL would not employ its own staff or rent premises, and said clerk services for the board would be provided by Gloucestershire-based The Trust Partnership at an hourly rate. Its website, fetl.org.uk, is due to go live shortly.