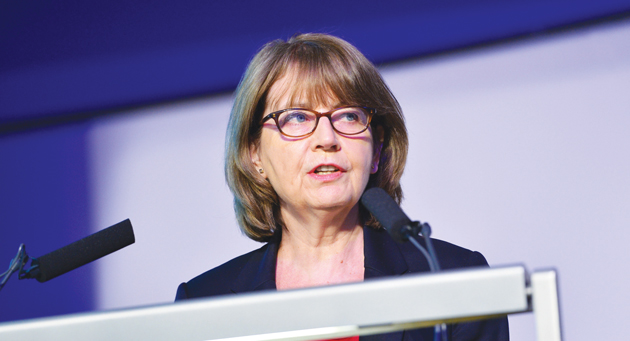 “As the popularity of apprenticeships increases, how can the sector ensure everyone has access to them?”

That was the question on everybody’s lips as the impact of race, gender or disability on whether learners start an apprenticeship provided the focus of debate at the Apprenticeship equalities conference on Tuesday April 29, held by the Trades’ Union Congress (TUC) in Central London.

Delegates also considered whether such demographics affect how much apprentices earn and what sector they train with TUC assistant general secretary Kay Carberry saying: “What is still missing in apprenticeships is equality.”

What is still missing in apprenticeships is equality — Kay Carberry

She pointed to TUC research, published six years ago, which highlighted a “gender segregation” in apprenticeships, with a high concentration of young women in the lowest paid apprenticeships.

“I’m very sorry to say that we haven’t made much progress since then,” she said.

“Research shows that women apprentices are still more likely to end up in low paid jobs and it also underlines the very low number of black people taking up apprenticeships, especially in higher paid sectors like engineering and construction.”

Ros McNeil, the National Union of Teachers’ head of education and equalities and Christine Townley, executive director of the Construction Youth Trust agreed, saying gender stereotyping often led childcare and hairdressing courses to be seen as female-only sector, while construction was considered masculine. Ms Townley said: “Forty two years ago, when I wanted to become a civil engineer I was told by the careers officer, ‘Girls don’t do that’. Recently I called a head teacher to come in and talk to the girls about construction and was told ‘my girls don’t do construction’.”

Ms McNeil said: “When we interview 14, 15 and 16-year-olds and ask the boys why they don’t want to do childcare, they often reply that they would like to but they say ‘I’m worried about what my mates and my dad might think, they might think that I’m gay’.

Peter Little, independent chair of the Department for Education advisory group on learners with learning difficulties and/or disabilities, said such misconceptions prevented young disabled people from getting onto apprenticeships.

“We need to get rid of some of the myths — one is that if you took on a disabled apprentice your success rates would plummet,” he said. “It’s not the case that if you take on someone with a disability, you’re taking on someone who won’t get there.”

Jeremy Crook, of the Black Training and Enterprise Group, called for a diversity forum, with representatives from employers, providers and unions, to be set up within the Skills Funding Agency to tackle the issues around gender, race and disability.

“We’ve got issues with different ethnic and gender groups on the labour market, and unless you’re going to talk about them openly and frankly I don’t think we’ll close this gap,” he said.

He added that providers needed to work with employers to examine application processes, as for every Bangladeshi person who gains an apprenticeship, nine have applied and for every black Caribbean person who starts, six have applied. “Something is going on in these processes… and that needs to be unpacked and looked at,” he said.

Steve Craig, national officer for strategy, education and organisation at the Union of Construction, Allied Trades and Technicians said there was “a disconnect” in the sector between being aware of inequality issues and taking action on them.

Shaks Ghosh, consultant on youth skills and employment, agreed, and pointed to role traineeships can play in increasing awareness of apprenticeships.

“There are a number of employers who are looking to traineeships because they have become concerned that the apprenticeships they run have become very single-focus,” she said. “It can also be glimpse into a world of work for young people who might have never been exposed to it before. Young people making the transition from school to work is probably one of the most difficult things that they’re going to do, but there’s really very little support for that as they walk about of the school gate.

She added: “My real call to action is: Can you help those young people who are just starting out now on their journey into the world of work?”.

Addressing the equality and diversity challenges in apprenticeships

There has been a policy focus on addressing inequalities in apprenticeships, particularly by gender, over many years, but achieving progress on the inclusion of women, ethnic minorities and other under-represented groups has proved challenging.

While women represent more than 50 per cent of apprentices, they often train in sectors that have low pay or offer limited opportunities for career progression. The conversion of existing employees to apprenticeships is more prevalent among women than men.

Among ethnic minorities, the overall low rate of participation is a concern, although participation also varies considerably between different ethnic groups and for some communities, it is far lower than would be expected based on population data.

The apprenticeship vacancy data shows significantly higher numbers of ethnic minority applicants than apprentices. In broad terms, demand exists among ethnic minorities but there is some blockage to their entry to the programme.

As part of recent research for Unionlearn, the Institute for Employment Studies explored the decisions made by young people about their careers and about pursuing apprenticeships.

Employer practices were examined along with the practices of providers, schools and other stakeholders, including those who support apprentices in the workplace.

It also revealed differing needs between ethnic minority communities, often linked to country of origin and migration trend. However, women predominate in advanced and higher apprenticeships, irrespective of ethnicity, and as such, these may provide a means to tackle the esteem and parity of apprenticeships.

There is a wealth of information and opinion about the barriers to apprenticeships for under-represented groups. The consistency in these over time, suggests that there is a gap in action rather than in knowledge. What we need to see is collaborative and concerted effort to overcome them.

Our recommendations to address the equality and diversity challenges in the programme includes, for ethnic minorities, more detailed exploration of prior qualifications and employability of those registered on the apprenticeship vacancies system, and support to enable applicants to successfully apply for vacancies. It also includes emphasis on apprenticeships as a route to professions as well as trades. Our research showed that for some ethnic minority groups, the message about quality is particularly important. Two further recommendations were an examination of recruitment strategies to understand whether there is unwitting discrimination or whether, with support from providers, union reps and/or union learning reps, small changes can make practices more inclusive, fair and equal; and the provision of role models to act as a source of inspiration and support to young people from diverse backgrounds.

Actions necessary to increase the representation of women in apprenticeships are well established. We reiterate these, and urge all apprenticeship organisations to consider what action they can take to embed them in practice. To increase gender equality in apprenticeships, what is needed includes better-quality, more in-depth and challenging careers education and guidance at an earlier age that, crucially, tackles occupational stereotypes. This should include information about how career choices affect future pay and progression.

And knowing about discrimination or division in an employment sector can deter people from considering that work, therefore more must be done to convince young women, as well as ensure, the door truly is open to them. Further, role models can be a powerful influence. Our research found that young women who enter non-traditional apprenticeships did so because they had family members working in the occupations. Widening ‘who’ influences young people beyond the immediate family is of critical importance and the lack of funding to support the costs of childcare while undertaking an apprenticeship also needs addressing.

Finally, supporting young people’s transition into the labour market is crucial. If they follow the academic pathway, they are highly supported; when they enter apprenticeships — which are, by definition, jobs — often young people ‘go it alone’.