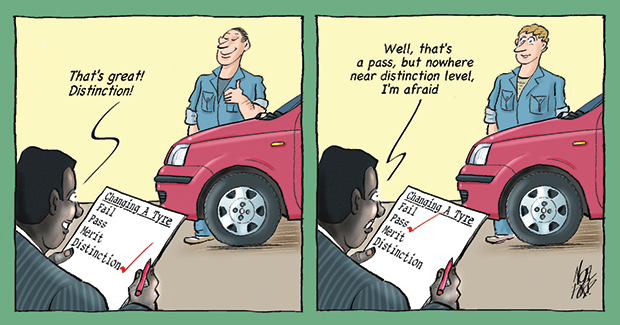 Proposals for apprentices to be successfully graded will pass, merit or distinction for their skills have been rejected, FE Week can reveal.

Trailblazer employer groups who have been helping develop new apprenticeship frameworks had been instructed to incorporate the three-grade system for marking successful outcomes.

We have agreed that for these occupations the grades of pass, merit, distinction, will be based on the apprentice’s mastery of the knowledge and behaviour elements within these specific apprenticeship standards.”

But Skills Minister Matthew Hancock has agreed to reject the idea for skills elements of programmes in the automotive and aerospace sectors after warnings that “you’re either capable of doing a thing or not”.

“We agreed this position for these particular standards as the employers felt that a significant amount of the skills elements could not be graded,” Mr Hancock told FE Week.

He added that other trailblazers were free to approach him to talk about their own standards.

“We have been open about this with the other trailblazers so that they are able to discuss any questions or issues they want to raise on grading for their apprenticeship standards,” said Mr Hancock.

Richard Hamer, education director and head of early career programmes at BAE Systems Plc, which is an aerospace Trailblazer, said: “We will have grades for the knowledge part of the course and the academic part of the course, but the skills element just can’t be graded in the same way.

“We took the view that this is binary — either you can put the wing on the plane or you can’t, you’re either capable of doing a thing or not — so those parts of it are not graded.

“We had a conversation with the minister and we explained to him that it’s just not workable, and he accepted the logic behind that.”

The idea of grading, rather than a simple pass or fail, was promoted by BAE group managing director Nigel Whitehead in his Review of Adult Vocational Qualifications in England last year. It was also put forward as a possibility in former Dragons’ Den investor Doug Richard’s 2012 Review of Apprenticeships.

Mr Richard said that “excellence should be celebrated — grading will help to enable this”, while Mr Whitehead’s review said grading would “increase the qualifications’ value to employers and individuals”.

The guidance document for the first group of Trailblazers, formed in October, said: “All new apprenticeships will be graded, with apprentices who successfully complete awarded a pass, merit or distinction.”

However, the guidance document published for the second round of Trailblazers this month did not include the instruction on grading.

Instead, it said: “As a minimum, grading will be applied to the end point assessment, and a pass will demonstrate full competency.”

However, the three-grade system looks to be remaining for both knowledge and behaviour elements of apprenticeships.
Mr Hancock said: “Grading is important to raise aspiration and mark high quality performance in an apprenticeship.

“We want an employer-driven apprenticeship programme and therefore where employers have raised questions or issues through the trailblazer process we have worked closely with them to look into these and find the best way forward.

“We have been responsive to employers and the aerospace and automotive trailblazers discussed in detail how we would implement grading in each trailblazer.

“We have agreed that for these occupations the grades of pass, merit, distinction, will be based on the apprentice’s mastery of the knowledge and behaviour elements within these specific apprenticeship standards.”

It’s a lovely idea to tell someone that their work is more than simply passable.

But if you’re just looking at whether a person can or can’t do something then it might all get a little complicated.

Judging whether someone had achieved pass, merit or distinction would have to go needlessly down to the minutiae of the job.

Our tyre-changing learners (pictured above) paint the picture neatly.

For how long did the learner carry the pneumatic drill at 90 degrees? How polished were the wheel nuts?
Won’t the result be the same?

Thankfully, Skills Minister Matthew Hancock has hit the brakes on the idea having listened to his Trailblazers.

Timely proof that employer-led might actually mean just that.