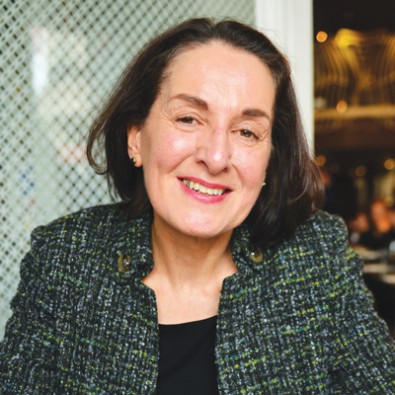 Dame Jackie Fisher, describes herself as “an outsider to the system looking in”.

Coming from the well-known former chief of one of the largest college groups in England, NGC (formerly Newcastle College Group), who was named a dame for her services to education in 2010, it’s a bit of a surprise.

“I don’t like rules that aren’t necessary, and I don’t like being organised or orchestrated — I never have,” she says.

Fisher’s attitude to “unnecessary” constraints may explain her formidable reputation in the sector, not least as the chief who booted Ofsted inspectors out of NCG in 2012 — something she describes as a “deeply painful” professional experience.

“I have always treated people, and expect to be treated, with openness, transparency, respect and a fundamental decency,” says the 55-year-old.

“And it was extremely disorientating, and actually quite traumatic, to find oneself in a position where they did not appear to be the predominant value system underpinning the inspection.”

But there’s a brusque pragmatism about Fisher, which you suspect would have allowed her to get past the experience.

“I think very few things are the end of your world,” she says.

I think very few things are the end of your world

“Most things help create the person you are and must be seen, as much as possible, as positive things. Because we are a work in progress, aren’t we?”

Another factor which might contribute to Fisher’s outsider sense is her strong identification with the north of England and her native Yorkshire, and a frustration with the North/South divide.

“When you meet people from London or the South, they immediately tell you how far north they’ve been, as though it requires a congratulatory handshake,” she explains.

Born near Leeds, Fisher describes her parents, Anne and Stanley, as “both very bright but intellectually-thwarted”.

“What you are talking about is people who were born pre-NHS, pre-state education, left school at 13,” she says.

“Without the war — I know it’s a harsh thing to say — they probably wouldn’t have had those opportunities presented to them.

“They were both, because of the time they were born, very closely tied into a kind of pre-opportunity Britain.”

However, Fisher explains, this background made it difficult for her parents to push her academically.

“I think they were educationally aspirational for me but in a very abstract way, without much of an understanding of the system and how it worked,” she says.

As a result, she says, she had “very little access or contact with professionals and I don’t think I had the experiences or the imagination to realise exactly what it was possible to do”.

Fisher left school at 16 and got a job with an insurance company, but her life changed when, at 18, she married and gave birth to twin boys.

She developed preeclampsia, a potentially life-threatening complication with the pregnancy that left her in hospital for four months.

“During that time, I met some professional women in hospital,” she says.

“And although I had been to school, clearly, that was my first real insight into how you get to university and how going to university can benefit you.”

Having recovered, an inspired Fisher began studying for A-levels in history, general studies and English, which she went on to study at bachelor’s and masters levels at Park Lane College (now Leeds City College).

“I like books, I like poetry… I believe it gives you a much more sophisticated understanding of the world, and of people’s motivations and desires – and I don’t think you can get that from anything but books,” she explains.

With two small children, her education was quite a balancing act, but she says, her studies were “helpful” in giving her a focus outside the home.

Having children at a young age, she says, was “just the way life turned out”.

“But I think it was a good thing,” she says.

“Forgetting the fact that I have some delightful and lovely children — which I do, and fabulous grandchildren — certainly at the time I was developing my career, it was easier and more sensible to have the kids delivered first, because if you took a career break 25 years ago it was actually a career killer.”

Fisher now has two stepchildren and nine grandchildren, with a 10th on the way, but the college leader tells me she doesn’t have any “matriarchal qualities”.

“My children were born assertive, confident — I am not entirely sure I made any contribution to shaping them at all,” she says.

Following university, Fisher got a job teaching English and communications at Wakefield College — with “absolutely no experience whatsoever”.

“I did actually seek help from my manager,” she says.

“She rammed a textbook into my hand and said: ‘Read it over the summer’.

“I have to say it was extremely helpful — apart from that, I made it up.”

In spite of this, she says, she absolutely loved teaching, and moved up the career ladder to St Helen’s College, before the ‘outsider’ became vice-principal and then principal at Tameside College.

There wasn’t a particular moment, she
says, when she decided she wanted to lead a college.

“I think it was evolutionary,” she says. “At the point where you become a senior manager, you become much closer to the detail of the job of a principal, and you ask yourself, ‘Could I do that job?’

“If the view that you take is that you can, then you ask yourself, ‘Do I want to do that job?’

Getting the Damehood, Fisher says, was “a very nice recognition, but it isn’t real life”.

“I’m not intuitively someone who takes pride in things, because it’s self-congratulatory and complacent,” she says.

After 12 years at NCG, Fisher made the decision to retire, and she says it had nothing to do with the Ofsted inspection.

“I believe organisations have a story arc, where a particular leader is the person to do that job — and I was very conscious over the last couple of years that my arc was coming to an end,” she says.

But now Fisher has taken the reins at Barnfield, a federation rocked by accusations of financial mismanagement and grade massaging, the outsider, it seems, has begun a challenging new story arc.

Beetroot and the bedroom tax

Being an English literature graduate, I have an interest in books and the theatre, and cinema, and I have a lot of family

I would not have a dinner party, regardless of who could attend. I would rather go to the pub