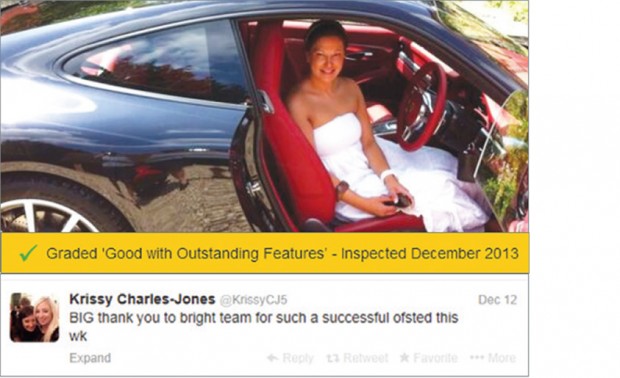 Ofsted is set to warn the boss of a London-based subcontractor to remove a Twitter post that wrongly suggested her firm had received a “successful” visit from the education watchdog.

Krissy Charles-Jones (pictured), chief executive of Bright Assessing, tweeted on December 12 last year to thank her team for “such a successful Ofsted”.

And the homepage of the provider’s website, at the time of going to press, also stated: “Graded ‘good with outstanding features’ — inspected December 2013” (pictured).

There was a further message that read: “Assessor training graded as ‘outstanding’ under Ofsted standards — December 2013”.

But the firm has not been inspected by Ofsted and, as a subcontractor, would not be fully inspected.

It had, in fact, hired Portsmouth-based private contractor Prospect Consultants to carry out an inspection based on Ofsted guidance.

A spokesperson for Bright said it had “no intention whatsoever to mislead anyone” with the postings. “Hence we have published the full report on our website — including the logo and the company letterhead of the consultants concerned,” he said.

However, Ofsted told FE Week that a letter would be sent to Bright asking for the tweet and any misleading messages on the firm’s website to be taken down.

“As with every other occasion when there is a potential misrepresentation of our name, or misuse of the Ofsted logo, we write to the organisation of individual concerned to clarify our position,” she said.

Ms Charles-Jones has amended her account since the offending tweet — which stated: “BIG thank you to Bright team for such a successful Ofsted this wk” — so that only confirmed followers can read her postings.

The Bright spokesperson said: “We are not subject to any mandatory or regulatory inspection by a government body or otherwise, so the only option open to us was to commission an inspection at our own initiative and expense.

“We specifically sought someone who was very familiar with the Ofsted framework, as they are a set of standards with which many of our learners are familiar, and they were instructed to use those terms of reference throughout.”

He added: “We tried to make the inspection as ‘real’ as possible for our staff and, with that in-mind, the team at Bright was informed at very short notice that an Ofsted inspection was being conducted — the day before the inspector arrived.

“This is why, on a Twitter account, a message of thanks to our staff was circulated thanking them for their cooperation with the ‘Ofsted inspection’ and it was only after the process had been completed that we made everyone aware that this had been an inspection conducted by consultants using the Ofsted framework rather than by Ofsted themselves.”

It comes after FE Week reported in November that Bright, which provides qualifications for unemployed people who want to re-enter the workplace, was being investigated by NCFE (formerly the Northern Council for Further Education) for a second time.

The provider had boasted a pass rate of between 95 per cent and 100 per cent.

The claim no longer appears on its website, but the firm is still being investigated over learners’ claims that courses were substandard.

The Skills Funding Agency and Ofqual are being kept informed about the investigation, which is expected to conclude shortly.