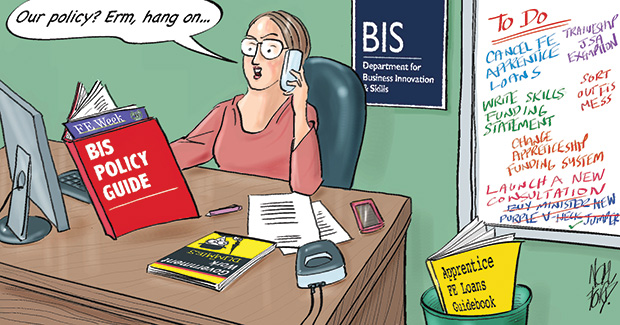 Business Secretary Vince Cable was grilled by MPs over why apprentice FE loans were still being officially advertised and processed despite the policy having been dropped.

He faced questions, along with civil servants Martin Donnelly and Howard Orme, about the loans for apprentices over the age of 24 being scrapped, as exclusively revealed in December by FE Week.

During the hearing, Dr Cable promised to investigate the matter, along with what he called a “communications failure” which led to the Skills Funding Agency (SFA) continuing to advertise 24+ apprentice loans on its website.

Labour MP Ann McKechin asked why members of the committee had not first heard about the decision to scrap the loans, which are still being processed by the Student Loans Company and advertised on the SFA website, through parliament.

She said: “Our committee staff noticed a reference reported in FE Week that you are withdrawing this particular scheme but we were unable to find any statement that you had made to parliament in this regard.

“We only found out simply by chance as a committee. There didn’t seem to have been any announcement made to parliament. It seemed to have gone into a newspaper first of all.”

Dr Cable said: “The 24+ loan scheme has worked well, in other words had a very big take-up for most of the training. But in the apprenticeship area there was very little take-up, we concluded that was not working and we decided to cease it. I can certainly try to find out why we did not brief parliament more thoroughly, that’s a perfectly fair point.”

Committee chair Adrian Bailey asked Dr Cable: “I understand from FE Week that the SFA website is still advertising these loans. There just seems to be some muddling and confusion.

“An announcement which was in FE Week that Parliament is not aware of, and the SFA, not exactly an insignificant player in this area, isn’t aware of it. What is going on?”

Dr Cable said: “I don’t know where the communications failure has occurred, we can investigate that, but certainly it’s absolutely right that they should be advertising 24+ loans because that is the policy and it is working. For apprenticeships, it has ceased and we can find out why the message hasn’t got through.”

He also defended the government’s traineeship programme and said it would help improve apprenticeship numbers in the 16 to 19 age group.

He said: “The figures show that apprenticeships have been expanding quite rapidly for all age groups except 16 to 19 and that almost certainly reflects employer preferences for people who have work experience.

“That’s why the apprenticeship reform we are ticking through at the moment is bringing in this concept of traineeships.

“Quite a lot of them are going into formal education. There is obviously a NEETs [Not in Education, Employment or Training] problem we are trying to address in a variety of ways. It is high and it is a worrying social phenomenon. I have seen some figures in the last week or so that show there is some genuine interest in the traineeship model but it’s far too early. We can certainly brief you on the figures we have got.”

He added: “Employers find it very difficult to take on teenagers, partly because a worryingly high number do not have English and maths, but also because habits of work have not been established.

“They want people who are ready for work and we have got to create a pathway which traineeships are designed to do.”