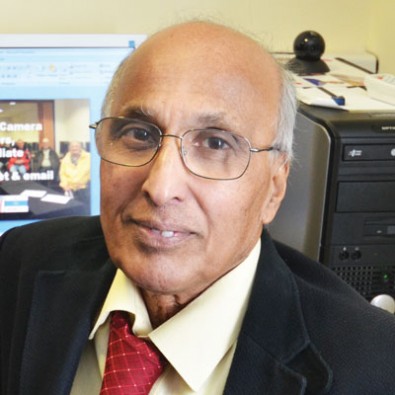 It has been a long journey for Ameen Hussain from the Indian Pearl City of Hyderabad to collecting an MBE for services to adult education and his local community in South London.

Hussain, aged 71, may have been “amazed, flabbergasted and humbled” to be recognised in the New Year honours list, but it was just reward for his dedication over more than two decades to broadening people’s horizons through the open-to-all Asian Resource Centre, in Abbey Wood.

His education of others started in 1970 for Hussain, with a maths teaching job at Sedgehill School, in Lewisham, South London.

“I wrote to my father saying ‘I think I will be out by Christmas, teaching probably isn’t for me’. It turned out I was wrong, as I stayed at Sedgehill for 32 years,” he said.

Hussain had moved to London three years earlier. His first job in England was working as a quality control inspector at Teddington Auto Controls, which made thermostats, and Landis and Gyr, in Acton, which made household electricity meters.

But he was destined to return to maths and the classroom having studied at two secondary schools in India before completing a degree in maths, physics and chemistry, along with a masters degree in maths at Osmania University, Hyderabad.

He was born in 1942 in Hyderabad, a city within a state bearing the same name.

I wrote to my father saying ‘I think I will be out by Christmas, teaching probably isn’t for me’. It turned out I was wrong, as I stayed at Sedgehill for 32 years

“I originally came over here because I wanted to continue my studies in the UK, but that turned out to be too expensive,” explained Hussain.

Hussain’s father Muhammed Khasim, who died in 1985 aged 77, was an excise inspector for Hyderabad’s civil service.

He moved around a lot because of the job and would take wife Kulsum, who died aged 76 in 1995, daughter Jameela, who died in December aged 73, and the young Ameen with him.

“My dad’s job took us all over Hyderabad, which meant I attended a lot of different primary schools in regions where people spoke different languages,” said Hussain. Ameen Hussain when he was nine years old

“I started-off in the Kannadi-speaking region, then moved to a school in the Telegu-speaking area, before going to another school where they spoke the Marahati language.

“Luckily, they all had Urdu as the main language of education, which was my mother tongue.”

He also dotes on his grandchildren Amanah, four, Yusuf, one, and Musab, who is four months old.

He said: “I am most proud of my family but of course have taken huge pride in the MBE, which I dedicate to my tutors, students and all the other people who have helped me along the way.”

It was while working at the Sedgehill that Hussain started teaching part-time at what was then called the Greenwich Asian Resource Centre from 1990.

He said: “The biggest influence on my community work was my dear friend and mentor Sadhu Sing Biring, who introduced me to the centre and was a great campaigner for the local Asian community.

“I taught at the centre in the evenings after school and on Saturdays until the council decided it wanted to withdraw funding in 1996 and the main centre closed temporarily.

“However, our languages school was still running and the tutors weren’t paid for six months, because there was no-one left to do the paperwork.

“The management committee asked if I could sort this problem out. I did the paperwork and sorted out the payments, then the main centre re-opened and I became more and more involved with things like helping people with passports and housing problems.”

Hussain took over as the centre’s manager after taking early retirement from his school in 2002, a year after its name was shortened to the Asian Resource Centre.

He said: “We dropped Greenwich from the name because we used to get phone calls asking if it was just for people from Greenwich, which it wasn’t.

“It became the Asian Resource Centre, but then we were getting non-Asian people asking if it was just for Asians and we welcome everyone, so these days we just call it ARC.”

Hussain is most proud of access to teaching courses for Asian women run by the centre from 2003 to 2005.

“I knew there was a lot of untapped talent among educated Asian women,” he said.

“Many of them had degrees, but they were not getting out of the house after marrying and having a family, because of the pressures of raising children and the stigma against them returning to work or education.

“We started running access to teaching courses, in partnership with the University of Greenwich, and ended up helping dozens of women on their way to better things.”

The centre has run a huge variety of classes during Hussain’s time in charge, including English for speakers of foreign languages, maths, science, dance and clothing repair classes for adults, and family learning sessions on computers, history and food from around the world.

The centre is still thriving today and Hussain has no intention of winding things down.

“We cater for everyone really. There’s one group called the Thamesmead Surfers for older people interested in learning about computers,” explained Hussain.

“The average age of people involved is 76 and they range from 69 to 84. We teach them about the internet, e-mail, digital cameras, and they used our computers at the centre to set up their own website.

“One of my favourite members, David Kelly, arrived at our door with a laptop in 2008 when he was 89 and asked if we could show him how to use it. He was one of our best students right up until he passed away two years ago.

“My great passion is for adult training and he was living proof of my firm belief that you can learn at any age.”

Gone With The Wind, by Margaret Mitchell

A top civil servant in India, like my father

I don’t hate anything