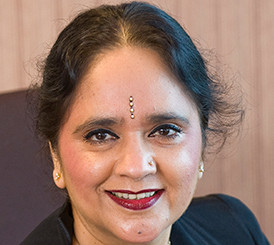 Mrs Khemka, principal of West Nottinghamshire College since May 2006, will be the first Indian-born woman for 83 years to be awarded the DBE.

She said: “To receive such recognition is deeply humbling. This is a shared honour; shared with everyone who I have worked with over the years.

“West Nottinghamshire College and the communities of Mansfield and Ashfield embraced me.

“We have worked together to achieve an ambitious vision for our communities. Without their unwavering support this would not have been possible and I pay tribute to them.

“I am indebted to my husband [Shankar] and my three children [daughter Shalini and sons Sheel and Sneh]; throughout this journey, they have been my rock and my inspiration.

“My passion for FE is impossible to describe and grows more so every day. I am immensely proud to be part of this amazing sector.”

A Cabinet Office spokesperson said: “Under Asha Khemka’s leadership, West Nottinghamshire College has become one of the most eminent FE colleges in the UK.

“She has embraced the apprenticeship agenda, leading the college to become the largest 16 to 18 provider in the UK and finding jobs for 700 young people in the first year.

“Her charitable trust, The Inspire and Achieve Foundation, is especially focused on those not in education, employment or training. She is in the process of opening a skills centre in India.”

More than 20 honours recipients linked to the sector were announced, including nine OBEs and a British Empire Medal. Among them was South Tyneside College principal Lindsey Whiterod (pictured right), whose OBE was also earned for services to FE.

She has worked in FE at senior management level since 2000 when she became director of the School of Business, Management and Computing at Newcastle College.

After three years she joined New College Durham as deputy principal, before returning to South Tyneside College as principal in October 2009.

Miss Whiterod said: “This is a tremendous honour, and indeed a great surprise. It is a very proud moment for me.

“I was taken aback when informed but I can see that I have been part of many good and positive advances and initiatives which I hope have benefited the students, lecturers and other staff that I have worked with.

“I have enjoyed a very happy and satisfying career and every stage has brought rewards as well as challenges, but I consider my best achievement to have been the driving up of standards at South Tyneside College as part of a wonderful team.” She said: “This is a tremendous honour and I am delighted to see recognition for vocational education.

“When I started out to deliver vocational learning which aimed to make students employable and work ready this was an unusual thing.

“I was lucky to be surrounded by talented people at West Cheshire College who were able to bring about this revolution in learning and open it up to all.”

Order of the British Empire (OBE)

For services to further and adult education

For services to the community in South Yorkshire

For services to vocational education

For services to adult education

For services to adult education and to the community in Greenwich

For services to education

For services to FE and the community in Northern Ireland

For services to FE in Wales

For services to skills training in Scotland

For services to skills training in the painting and decorating trade