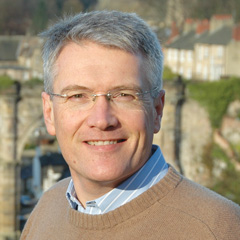 Andrew Jones MP is a little uncertain about being profiled when we meet in the glass-roofed atrium of Portcullis House, across the road from the Houses of Parliament.

“I don’t normally do this sort of thing. I normally talk about policies, not personalities,” he says. But he is happy to talk about his passion for cricket, which he says he has loved “from the very beginning”.

“Never any good at playing it, mind you, but I do occasionally play and occasionally umpire, but I’m a very enthusiastic spectator,” he says.

“I’ve travelled to lots of places, I should think 60 countries … a bit of a theme has been to go and watch England play cricket.”

But his traveling hasn’t always been connected to cricket.

At 19, Jones drove from coast to coast across America, “zig-zagging” his way from north east to south west on his own.

“It was great fun. I just set off, by myself, thinking: ‘Let’s see what happens’,” he says with a grin.

The standout moment of the trip he says, was his first glimpse of the Pacific Ocean in San Diego-California — a long way from his birthplace in Ilkley, near Bradford in Yorkshire.

“I travelled all the way from Ilkley to Leeds for university, which is a whole 15 miles and suddenly I’d embarked on a 4,000-mile journey,” the committed “Yorkie” says, still wide-eyed at the memory.

Jones worked in a seafood restaurant in Boston, Massachusetts, during his university summer holidays.

“It was fun, there was a buzz about it — I’d never been anywhere near America before and I thought: ‘Right, I’m enjoying this…I’ll go and see more of this place’. So I did. I saw lots and it was stunning.”

The 50-year-old is less clear about the moment he decided he wanted to be an MP.

“There was no ‘road to Damascus’ conversion,” he says.

“Certainly, after 1997, and the defeat of the Conservative Party, I thought: ‘Right, this is not acceptable – I’m going try to get more involved in stuff,’ but at no point up until that time had I thought about representative politics at all.

“So at some stage between 1997 and 1999 was the tipping point where interest became picking up the phone and trying to do something about it.”

“Some people do wake up at the age of 15 and think they want to be MPs, fair enough,” he says.

He says he was attracted to the “fast-moving” nature of business.

“Also, if you were brought up in my time, it was at a time of relentless commercial bad headlines, of Britain on the slide, Britain not recoverable, strikes, three-day weeks, petrol rationing…,” he says.

“I can remember power cuts and job losses… So there was a little bit of a feeling that: ‘Business needs to perform better, I like business, that’s what I’m going to do’.”

Jones’ father, Richard, worked in marketing for the textile company Lister, whose mill towered over Bradford.

“It was quite fun, going in to see the business,” says Jones.

“You would see things like looms, weaving … it’s quite exciting to see if you’re going in as a small boy.”

Jones says the upbringing he looks back on was “a happy childhood where opportunities are open to you”.

His mother, Jean, worked in a bookshop, in between caring for Jones and his brother,  , who also went into business.

“It’s inevitable that your upbringing has an impact on you,” he says.

“My father worked in marketing, but I didn’t set off into marketing thinking: ‘I’ll do what my father did’, but I did.

“So if there was an impact, then it wasn’t a conscious one.”

Jones enjoyed school, and went on to study A-levels and English literature at Leeds University (where he got a “very sociable” third class degree) before going on to work for in marketing for B&Q.

“I really enjoyed it and it was a fantastic learning experience for me because it was a time of huge expansion of the business, it was very entrepreneurial, very successful,” he says.

Jones worked in a range of marketing roles for different companies, until, while working for Leeds-based retail consultancy The Marketing Store, he found himself redundant.

“It’s not a particularly pleasant experience, but it was an interesting time because I went to work with some friends starting a business called Savvy Marketing, which is still going strong,” he says, cheerfully.

“It’s a bit of a shock when these things happen, but it’s something which happens a lot and can happen more than once in a career. So the question is how you respond to it really.”

After 1997, he was drawn into grassroots and community politics and eventually to the idea of standing for election.

He was elected as a councillor for High Harrogate in 2003, and became Cabinet Member for Finance and Resources.

But Parliament still beckoned, and in 2010 he was elected MP for Harrogate and Knaresborough.

“It’s quite a shock actually, if we’re being honest about it,” he says of his election victory, where he overturned a 10,500 Liberal Democrat majority.

“I actually did go home and write a losing speech before writing a winning speech after polling day, because I thought it was going to be close but I wasn’t quite sure.

“I had been very focused on the finish line of election day itself, rather than what happened next.

“When you are standing on the platform and the results are announced, it feels slightly surreal, but as you get off the platform the returning officer gives you an envelope, which is an envelope they will give to each winning MP, and it’s basically, ‘Dear member of Parliament’ — it’s the first time I had ever been called that — ‘here are your joining instructions, please report to Portcullis House on Monday, for the start of your induction course’.

Although he can see connections between his career in business, and his new one in politics, Jones admits he’s slightly surprised by the way life turned out.

“If you’d gone to Andrew Jones in 1985 as a marketing employee at B&Q and said: ‘You’ll be a Member of Parliament in 25 years’ time’ I’d have thought you’d got the wrong Andrew Jones,” he says.

But it was his love of the business world, he says, which has brought him into the role of apprenticeship ambassador.

“Skills are a huge part of turning our economy around … and apprenticeships are very much a part of that,” explains Jones.

“I think this is something which has got broad support across the political divide… colleagues love hearing about apprenticeships and meeting apprentices in their area, and quite frankly who, as a Member of Parliament, wouldn’t want to go out and visit successful businesses and meet people learning for the future, investing in skills — who wouldn’t get behind that?”

You’re never quite off-duty as an MP, but one of the real benefits of being a Yorkie, particularly where I’m from, is that we have fantastic scenery. I go for walks on the Dales or on the moors

Cynicism about community work or about public service

What did you want to be when you
grew up?

Not an MP — I wanted to be in business