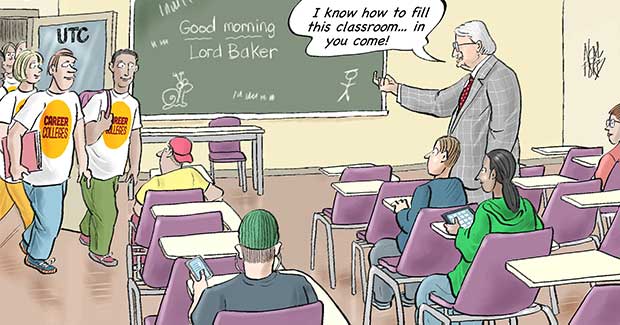 Former Education Secretary Lord Baker has defended University Technical College (UTCs) after it was revealed that some were running at less than a third of capacity.

He said figures showing the 150-pupil Central Bedfordshire UTC was just 30 per cent full for the last academic year, while the 480-pupil Black Country UTC, near Birmingham, was 36 per cent full, would improve.

The Central Bedfordshire UTC opened its doors last year and the Black Country UTC — so far the only one inspected by Ofsted, which gave it a grade three rating — started the year before.

What happens is that head teachers of state schools are allocated pupils by the local authority, but we have to go out and get our pupils with marketing.

A further three were open for the start of 2012/13 and they saw greater percentage headcounts, but the combined figure for all five was still only 55 per cent (795 pupils).

Lord Baker, who is chair of the UTC brand and last month revealed plans for similar 14+ vocational institutions with Career Colleges, told FE Week: “Figures will be a lot higher than 30 or 36 per cent and will be rising, but you can’t possibly put an exact number on it.

“What happens is that head teachers of state schools are allocated pupils by the local authority, but we have to go out and get our pupils with marketing.

“We’ve increased our marketing skills and I’ve met a number of new UTC principals and we’ve been talking about what they’ve got to be doing.

“There is one opening in Warwick next year and it had an opening evening the other night and 700 people turned up, so the news is getting around.”

Sue Clark, governors’ chair at Central Bedfordshire UTC, said: “This is a very new UTC and it is going to take a little while to build our numbers, particularly as pupils and their families need to adjust to the idea of a non-standard transfer age at 14.

“Pupils at our UTC are very positive about the decision they have made to join us, and I expect us to increase our numbers successfully as we become more established.
“The concept of the UTC with its close employer engagement is a very exciting proposition.”

A Black Country UTC spokesperson said: “Recruitment was always expected to be slower in the first few years while a platform is built and the success stories of our students allows others to see what can be achieved in this unique learning environment.

“Establishing a new institution with no story to tell, no precedent and no history of a transfer aged 14 was always going to be challenging. However, the Black Country UTC and Walsall College, our lead sponsors, are firmly committed to the concept and its aims.”

He added: “The grades, apprenticeships and jobs achieved since opening in 2011 clearly show that a specialist institution such as this can deliver significant benefits for students in our region and the Black Country UTC remains tied into Walsall College’s wider strategic growth for engineering.”

The capacity figures were revealed in answer to a parliamentary question. They showed the 180-pupil Aston University Engineering Academy, in Birmingham, was 76 per cent full, the 100-pupil Hackney University Technical College was at 77 per cent and the 540-pupil JCB Academy, in Uttoxeter, was 66 per cent full.

“What the capacity figures haven’t reflected is that of the 12 that opened this year for example, at Greenwich we had 300 students start and in Liverpool Life Sciences 200 started, and there’s going to be 400 next year, and Elstree opened with 350 students,” said Lord Baker.

Despite a robust defence from Lord Baker, his UTC project appears to be in trouble.

With so much invested in new buildings, facilities and staff you would have expected the first UTCs to have had an early halo effect, with full classrooms and long waiting lists amid a clamor for limited places.

But no, we find the five UTCs were running at just 57 per cent capacity last year.

As the halo effect fades, and colleges begin competing for the same 14 to 16-year-old learners, the project is at risk of losing hard-won government support.

So, unless the pause button on UTCs is pressed, Baker could legitimately be accused of presiding over a vanity project.

I am sure his intentions are good, but before any more public money is spend on new UTCs it seems reasonable to ask for more evidence of success.

Not just in terms of higher recruitment levels, but also evidence from Ofsted that they deliver a positive learner experience.

So in the meantime, 14 to 16 year-old resources would be better spent on large, well-established and successful FE colleges.

Their time has come, the argument over direct recruitment at 14 has been won — and it’s time for Baker to back off.