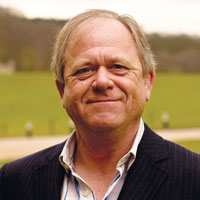 It is somewhat ironic that Don Hayes was not a fan of education as a teenager and left school at the first opportunity to start work.

Straight after finishing his O-levels, he got a job as a trainee manager at a concrete and clay manufacturing company, before leaving to help with his father, Gordon’s knitwear and hosiery wholesale business.

“It’s funny how I’m in FE now, because I don’t think education was something I took too much,” he says.

“I wanted to get out, I wanted to work. So I left and my father said, ‘Well you’ve got to get a job’, and I had three interviews in a week.

“One was with the civil service at the local tax office, one was with an insurance company and then there was this one with the concrete and clay company.

“Actually, getting a job in those days wasn’t so hard, so I got three interviews and three jobs and had to choose.

“I don’t know whether my dislike of school came from bad teaching or whether it was just me.

It’s funny how I’m in FE now, because I don’t think education was something I took too much

“Everyone else seemed to get on ok. It was a good school I went to. I think it was probably just that I wasn’t ready to buckle down and be receptive to what was being taught — I only engaged with sports really.”

The world of work, however, was an entirely different ball game for the dad-of-three, who declines to give his age.

“I seemed to have employability skills. I seemed to take to it straight away. The drive for me was there, but I don’t know why that was, it wasn’t anything I’d been taught in school,” he says.

“Possibly, it was a personality thing — it must have come from my parents, I guess. They were very supportive, but they were hard workers and they were entrepreneurial.”

Hayes explained his mother, Doris, may have been from a generation where women were expected to concentrate on bringing up their children, but she still went on to launch a costume jewellery wholesale company. Don Hayes on holiday in Italy

When his father needed help with his business, he went to work for him before moving on to a similar fashion and textile company.

Hayes was born in Birmingham, but the family moved with his father’s job, first to Leicester and then to Nottingham.

“I think I can say I’m from Nottingham, as I’ve been in Nottingham since my teens,” he says.

“But I still go back to Leicester for the football, so I’ve left something behind there too.”

Youth clubs, it seems, have played a significant role in Hayes life, as it was during his own time attending one as a teenager that he met his future wife Christine.

“She was 17 and I was about 19 when we started dating. Then she left to go to London for three-and-a-half years because she wanted to become a nurse and she was training at the Nightingale School, at St Thomas’ Hospital. It’s surprising it lasted with me stuck in Nottingham,” he says with a grin.

The couple were married shortly after Christine returned from London.

The second time a youth club altered the fabric of Hayes’ life was when he took on some voluntary youth work in his late twenties.

“I was running a predominately afro-Caribbean youth club on a deprived estate just outside the city and that opened my eyes a bit really, in terms of some of the difficulties facing young people there,” says Hayes.

“It was a bit of an epiphany — I stopped wanting to work for profit and started to work more towards the good of the community and that’s how I still feel.”

So Hayes took on a job on a community project, helping unemployed people back in to work and has never looked back.

He was, he says, hoping to take a break, but so far, that hasn’t materialised, and instead he found himself in his current role at Enable, an organisation that represents smaller voluntary FE organisations.

“Enable was formed just after the start of the Learning and Skills Council [LSC] and it was a sort of a response to it — local voluntary organisations were concerned about the formation of this massive government body and they wanted to be able to have a dialogue with this organisation,” he says.

“The Nottingham Council Voluntary Service got all these organisations together as a forum, which the LSC could come and talk to, and organisations managed to persuade the LSC to give them £40,000 to make this forum more effective, so they could have a newsletter and so on and what they actually decided to do was to employ someone.

“This happened at a time when I was leaving my previous employer and I’d kept in touch with what was going on with this forum.

“I was going to have some time off after that job and see the places maybe I’d always wanted to go to and think about what I was going to do next.

“But then I thought ‘maybe I quite fancy getting involved with this — I’ll spend a year trying to see if I can develop the idea, and then I’ll go off and do something else’. That was 10 years ago.”

He and Christine visit Italy most years, “where there’s always something to see”, but if he were to take-off on his travels tomorrow, he says, Japan would be his ideal destination.

But it looks like Tokyo may have to wait, as he’s also now a board member for the Education and Training Foundation (ETF), and plans to use the opportunity to promote the voluntary sector.

“I still believe absolutely that voluntary organisations have a vital role to play,” he explains.

“My particular interest is in deprived communities — people who are not accessing the opportunities that are available and always seem to be left behind.

“Where there’s the creation of employment opportunities in cities, it’s about making sure they’ll actually get the jobs, and I see voluntary organisations as being key to that.

“We have to keep fighting because the voluntary sector kind of gets discounted or forgotten about.”

The reason the sector gets “discounted” he says, is a lack of awareness of what voluntary organisations do, and a perception that the voluntary sector might be good at engagement but cannot deliver “hard outcomes” such as qualifications and jobs.

“What I find really, really frustrating is to still have to be saying the same things after 10 years about the sector, because people still haven’t got it or people have moved on, so we do tend to get left behind,” he says.

But he is hopeful the foundation will “very much have an impact” on this situation.

“I’m on it because I want to see the quality of FE driven up, and teaching in particular,” says Hayes.

“But I also want to see the ETF not forget the voluntary sector and remembering there’s actually a massive number of people out there delivering FE learning.

“We must make sure the sector’s not forgotten.”