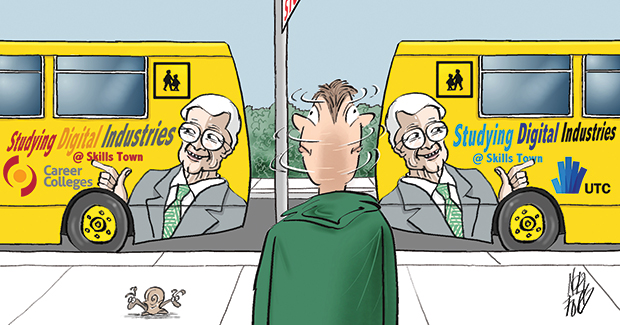 Further education leaders have expressed concern at Lord Baker’s plans to establish “yet another” brand of vocational training colleges.

The Tory peer has announced new proposals to create Careers Colleges, focussing on training from 14 years old in areas including hospitality, tourism, finance, health and care and construction. These would be based at existing colleges, follow 14 to 16 direct recruitment funding rules, but require a subsidiary board made up of at least 40 per cent employers.

But sector leaders are worried these would be similar to existing University Technical Colleges (UTCs), a programme which Lord Baker also leads. These independent institutions offer 14 to 19-year-olds vocational training in science, technology, engineering and maths-based (STEM) subjects, alongside the teaching of core academic subjects.

Lynne Sedgmore, executive director of the 157 Group, said: “We are keen to ensure that creating another type of institution catering for 14-year-olds does not further confuse the picture for parents and young people at a time when recent reports have been critical of guidance processes within the system as it is.”

Lord Baker laid out his plans for 40 Careers Colleges over the next four years at the annual Edge Foundation lecture, The first colleges are being set up in Oldham, Oxford, Bromley, Purfleet and Vauxhall Colleges.

The peer denied UTCs and Career Colleges could cause confusion, or had the potential to compete with each other.

“There’s a demarcation line. UTCs are for STEM subjects and careers colleges are non-STEM subjects,” he said.

Nevertheless, Martin Doel, chief executive of the Association of Colleges, said: “Career colleges are another option for this age group, alongside UTCs, studio schools and direct enrolment in further education colleges. An advantage of a career college might be that they would be a subsidiary of an FE college which means they could share resources, staff and facilities.

“But we are not recommending one option over another — it is the choice of each individual college whether they choose to become involved in any of these initiatives.”

Brian Lightman, Association of School and College Leaders general secretary, said: “These new colleges will be good for the students who can access them, but the reality is that they are expensive to open and will benefit a small number of young people.”

Sixth Form Colleges’ Association deputy chief executive James Kewin said: “At a time when sixth form colleges are grappling with unprecedented cuts to their funding, we would question the wisdom of introducing yet another type of new and unproven provider.”

Lord Baker said: “What Careers Colleges will create is a truly integrated student pathway. I have a high regard for FE colleges, but they’ve not ever attempted to do in the past what’s called a rounded education, they sell courses.”

He denied that the planned Career College at Oldham College, which would provide digital content creation training, would compete with Salford’s MEDIACITYUK UTC, which is set to specialise in creative and digital industries for the nearby BBC studios. Both colleges are due to open next year.

He added the legal format, how much colleges would pay to have their provision recognised as a Careers College and exactly what support they would be given in return had yet to be agreed.

The Baker’s dozen you wanted answering 1. How many Career Colleges would you like to see in 10 years’ time?

I’d like to see as many as the market can hold, and the market is the number of employers who want them.

2. How many University Technical Colleges (UTCs) would you like to see in 10 years’ time?

Again I’d like to see as many as we can get. David Cameron has just said he wants to see a UTC in every major town of the country. It depends how you define major, but that’s many more than what we’ve got at the moment.

3. Which sector do you see there being the most need for UTCs in?

If you take all the industries, and mechanical industries, electrical industry, agricultural industries or computing industries, they are massively short on skills. At a UTC in Wigan I met representatives of the food processing industry who said they were 100,000 short or technicians and they didn’t know what to do.

4. Which sector do you see there being the most need for Career Colleges in?

5. Do you still think that failing colleges should be made into UTCs as you wrote in a column for The Times in November last year?

I still believe, yes, if any college or school is really failing, if you can’t get it right, you close the school and open again as a different institution, a UTC or career college.

6. Given a choice, would you send your child to a Careers College or a UTC?

It would depend entirely on the talent of my child. If it was a STEM [science, technology, engineering, and mathematics] subject then a UTC would be a wonderful start, if it was somebody interested in the creative industries, for example, arts, theatre and music, I’d say go to a Career College.

7. What are your thoughts on direct recruitment at 14 for general FE Colleges?

Let’s wait and see. It’s a tremendous transformation for an FE college. They don’t have to have a Career College, but I think already several are saying that some of them want to do it.

8. How do you think Matthew Hancock is performing as Skills Minister?

Very well, he’s a very gifted person. He’s very ambitious but he’s also very able. He goes down very well in the FE world, there’s no question about that.

9. How do you think Michael Gove is performing as Education Secretary?

He’s doing very well, he’s trying to drive up standards in schools and good luck to him.

10. Do you think David Cameron can win the next general election?

11. Do you think he can win it without the need for a coalition?

Now that’s more difficult to say. Maybe we are moving into an era of coalition politics, but I think he has the capacity to win certainly the most number of seats and that could well be an overall majority.

12. It seems that today young people are portrayed in a number of different ways, from being unwilling to get a job, or being unable to get a job. What do you think of this generation of young people?

I think this generation of young people is very imaginative, they are very adaptable to new technologies, no question about that at all. And they want better opportunities, in life and they’re not getting them. There a million young unemployed people in our country and that’s an absolute disgrace.

Yes, I enjoy satire, I’ve written books on satire and all politicians love to be caricatured.