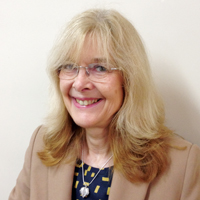 The tale of Lynsi Hayward-Smith’s journey into FE management, she says, “is an ongoing story of being excited by what I do”.

“Any challenge, any opportunity, I’m always interested,” she says.

But change has not always been her friend.

Now aged 60, Hayward-Smith harboured dreams of becoming a ballerina in her youth, but then she grew too tall.

“The maximum height was 5ft 6 and I’m 5ft 7, which was slightly devastating at the time,” she says, ruefully.

Her second career choice — a primary school teacher — was influenced by her childhood, when her family moved frequently due to her father, Henry’s job as a public sector architect.

She now lives in a converted 17th century barn, “with roots and beams— it’s a home that feels like a home,” she says.

And having roots is important to Hayward-Smith, “particularly when I was bringing my children up, I didn’t really want them to have the kind of experience I did of having to be the new girl eight times,” she says.

She adds: “I went to, I think, a total of eight different schools.

“I was aware of teachers and how important they were, as they were the people I first knew in those schools… and they had different skills and qualities.

“I was doing a bit of an evaluation and thinking ‘I could do that’, although I didn’t have that in my ambitions then — I was still being a ballerina at the time. I could see there were some teachers who just got it right and made you feel like you’d got potential.” Hayward-Smith credits one of those many teachers, a “Mrs Stewart,” with inspiring her love of poetry, particularly, she says, WB Yeats and Russian poet Yevgeny Yevtushenko.

“Mrs Stewart loved poetry and she really switched me on to it,” she says.

“But she brought alive for me the idea of how prose and poetry can communicate ideas in this very beautiful way.”

So could writing have been another career path for Hayward-Smith?

“I wrote reams of dreadful poetry,” she admits, laughing, but says she hasn’t attempted a novel, “yet — but there’s always hope”.

With so many possible directions, it’s no wonder that Hayward-Smith’s working life has been somewhat varied.

She completed her teacher training at Hockerill Teacher Training College in 1974 and took up a job in a Lancashire primary school that she “absolutely loved”.

From there she moved into the role of community liaison teacher, working across three different schools with children who found school challenging, and it was during this job that “things really took off”.

“I really enjoyed that, being able to help them make connections, help them resolve their problems, see them move on, change and develop,” says Hayward-Smith.

She continued in this role until the birth of her children.

“I didn’t take very much of a gap,” says Hayward-Smith.

“I was asked to work in the voluntary sector running the East Herts Community play bus which went out to rural villages where they had absolutely no early years provision, offering activities for families, somewhere for mothers to connect and for young children to learn through play.

“It was a bit of a departure, but something I could really see the value of.

“It gave a whole raft experience of working in a sector where money is tight and we make it go a really long way, learning how to offer something which is of enormous value to people that doesn’t actually involve huge resource but is in the right place at the right time, which was really fulfilling.”

And so her move into FE happened “slightly by accident”.

“I was asked to go and speak to a group of young students about the work of the play bus and the lecturer that invited me eventually said ‘why don’t you come and work for us?’,” she explains.

“At the same time I started teaching some adult literacy, again, something which was specifically aimed at people who needed to re-engage with education and come back into it. It was a very fulfilling and interesting time.”

Although she is now in management, she says her time teaching has made her keenly aware of the importance of frontline teaching staff in FE.

I am actually a waste of space without the frontline“

“I am actually a waste of space without the frontline,” she says.

“We can talk about how we envision [the sector] but if it’s not happening in the classrooms… if learners’ outcomes are not what they need them to be, then we’ve wasted our time.”

She adds: “That’s why the Education and Training Foundation is so important in terms of the professionalisation of the front line.

“I think change is challenging for everyone, but it depends where you are in that change and how much autonomy you have over it.

“I think when you’re making changes you have to go to the person with the least ability
to affect the change and find out if it’s alright with them.”

And this equally applies to the foundation, she says.

“I do think it’s really important that we bring the sector with us.”

But Hayward-Smith has not quite given up teaching. She plans to put a recently-acquired coaching and mentoring qualification to good use, helping her junior county council colleagues.

“I still love it when I get to do some staff development or where I get to go into a class and work with people,” she says.

“It’s about passing on my skills, if you like, but also being able to see a vision of an organisation going in a particular direction.

“It’s taking all of the ingredients that I gathered around me, working on a playbus, working in classroom, working in adult literacy, all those bits of experience and using them to help me shape the future.”

And Hayward-Smith’s plans for her own development include improving her coaching and learning Italian.

“I’ve been in education for 39 years and it’s still fresh and exciting and there are still things I need to do,” she explains.

“I think having aspirations for yourself rubs off on the people around you, if you appear to be satisfied with where you are, that’s not very exciting for the people you’re with.

“If you ever stop developing yourself then the time has come to hang up your whatevers.”