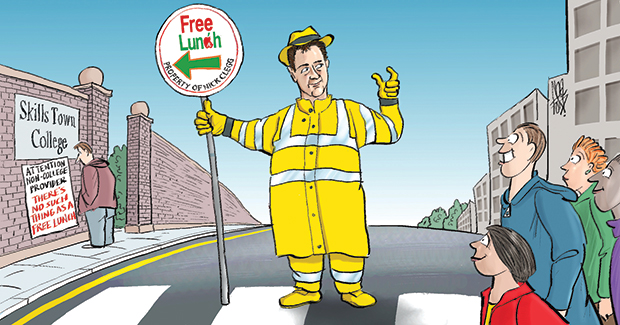 Further education students are to get free school meals, the government has announced — but learners at independent training providers (ITPs) will miss out, FE Week has learned.

The move is expected to kick in this time next year, despite disadvantaged youngsters at school sixth forms already getting free food.

It comes more than a year after the Association of Colleges (AoC) launched its No Free Lunch? campaign — symbolised by a lollypop.

The AoC welcomed the move, with chief executive Martin Doel labelling it “great news,” but the Association of Employment and Learning Providers (AELP) was critical after it emerged ITP learners would not be eligible.

Stewart Segal, AELP chief executive, said: “We are delighted that disadvantaged students in sixth forms and colleges will benefit but a fair policy should cover all disadvantaged young people in programmes funded by the Education Funding Agency.

“As we had to point out in making representations previously about rules for the former Education Maintenance Allowance, the outreach of independent providers, including many charities, takes them into the most deprived estates and communities in the country and the young people they support should also be beneficiaries.”

Chris Walden, director of communications and public affairs at the AoC, said: “Our successful campaign for the funding of free meals to be extended to disadvantaged 16 to 18-year-olds studying full-time in general FE or sixth form colleges was launched before the traineeship programme was developed, but we’ll be discussing the details with ministers and officials and this issue will no doubt come up.”

Mr Clegg announced his £600m plans, which include free meals for all children in the first three years of primary school from next September, at his party’s conference in Glasgow last week.

He said: “Universal free school meals will help give every child the chance in life that they deserve, building a stronger economy and fairer society.”

Skills Minister Matthew Hancock was pictured in FE Week in November being handed a campaign lollypop at the AoC conference in Birmingham.

The campaign peaked earlier this year when around 10,000 students, MPs and members of the public signed an e-petition on the 10 Downing Street website.

Conservative MP for Harlow Robert Halfon also championed the cause, securing a parliamentary debate on the issue which had been due to take place next month.

After presenting a motion to the Backbench Business Committee on Tuesday, September 10, he gained support from 75 MPs, including 18 from other political parties.