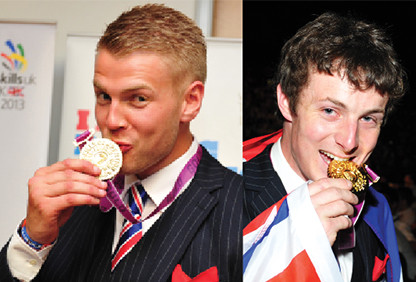 A bricklayer from Warrington and a cabinet maker from Chichester proved to be golden for the UK as they were honoured as the best young tradesmen in the world.

A visibly moved Ashley told FE Week just moments after learning of his success: “I’m so happy. I saw my mum and my dad when my gold was announced and they were going crazy.

“I’ve lived WorldSkills for the past two years, but I wasn’t expecting to win anything.

“It means everything to me. It will change my life – I’m the world’s best young bricklayer now.”

George, who also scored highest among Team UK to claim the best in nation award, said: “I knew I’d done well in the tasks, but thought there was really little in it.

“I tried my best, but when I saw other countries winning golds I thought ‘maybe it’s not our year’.

“But I’m ecstatic. All the hard work I’ve put in has paid off.”

Prime Minister David Cameron said: “British ambition and ingenuity has once again taken on and beaten the best in the world and I extend my congratulations to Team UK.

“As we compete in the global race, this government is on the side of ambitious young people who want to work hard and get on and we will continue in our efforts to build the biggest and best apprenticeship programme.”

There were also 17 medallions for excellence dished out among Team UK members who hit world class scores in their skill.

“They have demonstrated that when it comes to skills Britain has world class ability.

“Vocational skills are important to the success of every business. That’s why in these difficult times I have prioritised apprenticeship funding, so that employers can access the country’s talent to help build a stronger economy.”

“They have played a hugely important role in promoting the importance and value of vocational skills and practical learning to young people, their parents and employers.”