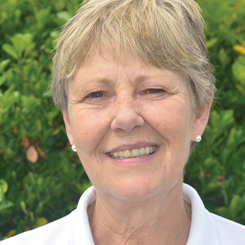 The first thing Sandra Coats tells me when we meet in the canteen at Barking and Dagenham College is that she’s “what you’d describe as ordinary”.

But at the end of last year something quite extraordinary happened to this catering assistant from Romford.

She received a letter from Buckingham Palace saying that she’d been nominated for a British Empire Medal in the New Year’s Honours list for her outstanding contribution at work.

“I thought someone was having a laugh,” says the 58-year-old.

“I opened the letter and flicked my eyes through and said to my husband that someone was having a joke. He looked at it and said it couldn’t be — it looked real. I was delighted, but I couldn’t tell anyone until it was all official.”

But she stands out, according to college principal Cathy Walsh, who put her forward for the honour because of the long hours that she puts in and the patience and attention she shows all students, especially those with disabilities.

“My start time is 7am but I’m always here at 6.20,” says straight-talking Sandra, who’s married to Robert, a heavy goods vehicle driver.

“I was doing lots of late evenings, not finishing until 8 at night. The principal recognised I was always here,” she admits.

“Some of our students are in wheelchairs and can’t see over the counter, so I tell them what’s on there. Some are blind so I just help them out — carry their food. I always talk to them . . . even if I’m pushed for time. I’ll be doing the sandwiches sometimes and they’ll just come over and start chatting and I suppose I listen to them rather than pushing them away.

“If I finish work late that day because I’ve spoken to them, then I finish late. I like being involved with things, people.”

The mother of Stephen, 38, Trevor, 34, Matthew, 31, and Michelle, 28, had her efforts rewarded at a special ceremony at the Tower of London.

“I spent a fortune on that day but it was worth every penny,” says Essex-born Sandra, who had the help of a personal shopper to pick out an outfit for the event.

With husband, Michelle and her partner by her side, she says that it was a day that she will never forget.

“I didn’t like school, I was never very good at exams”

“The Queen’s lieutenant [Sir David Brewer, Lord-Lieutenant of Greater London] read a bit out about us all and we went up one-by-one to get our award,” says Sandra.

She admits that she was “a bit nervous” because she didn’t know what to expect.

“I’d never experienced anything like it. There were about 40 of us, all people who’d helped the community and those who helped with the Olympics, then we had a biscuit and a cup of tea. It was lovely,” explains Sandra.

The real highlight, though, was her brush with royalty at Buckingham Palace where she was invited for a garden party in May.

“We stood in rows and the Queen came down one side and Prince Philip the other. Princess Beatrice was there too,” says Sandra, who spent three hours walking around the palace gardens.

“The Queen then went off to the bottom of the garden into a tent for her and the higher people with their medals.

“There were juices on arrival, ice creams on little trays, a band, nice sandwiches cut into fingers, little cakes and a lovely cup of tea.

“You felt important, but you knew there
were more important people than you. It was all a bit of an experience. You didn’t feel out of place, they made you feel welcome and were very friendly.”

In fact the magic of the day rubbed off so much that Sandra says her dream job these days would be to work at the palace.

“I would love to work up there, it was all so nice,” says the grandmother-of-three.

“I saw an advert for a job there and you got all your accommodation paid for. I’m too old now, but it would be nice for a younger person.”

She says she likes the variety of her own job but admits there’s a lot of pressure.

“It’s a circle,” she says of her typical working day. It involves putting away deliveries, cooking breakfasts — eggs, bacon, sausages and burgers — helping out on the counter and taking packed lunches to rooms. And that’s before she starts on the jacket potatoes and chips for lunch, fish for the salad bar, as well as starting preparation for the next day.

“Sometimes I do four jobs rolled into one, but the principal did notice and got me in some extra help,” says Sandra.

“They’re not a bad crowd, the students.  You get the odd one come through, but if there are any dramas I just phone security. We have focus children — ones who’ve left school earlier than they should have done — they can cause a bit of a stir.

“They get loud and change their mind about what they want. I just ask them to move on. They’ll give you back chat but they go in the end. I don’t mind.”

Sandra says that she didn’t enjoy her own education. “I didn’t like school, I was never very good at exams,” she says.

“I did go to commercial college in Romford and trained to be a shorthand typist. That’s just what you did.”

She went on to work at an insurance company in Liverpool Street and then Lloyds Bank before leaving to have her children.

“When the children started at school I started as a school meals assistant part-time, then full-time at a nursery in the kitchen. But it was the same every day and I don’t like just standing about, so six years ago I came here,” she says.

Despite all the fuss that’s been made of her, she says she’s hasn’t changed “one bit”.

“I’m up-front and I say what I think. I’m friendly but I do speak my mind and don’t let people walk all over me,” explains Sandra.

She also concedes that cooking isn’t her forte. “I’ll be honest; I’m lazy when I get home,” she says. “My husband is late in too, so we normally eat takeaways or something quick.”

She doesn’t know why she’s so hard working, “it’s just how I’ve always been,” she says.

“My dad worked in a local brewery and my mum in the doctors’ surgery. They always worked and so have I — I just get on with it, plodding along day-by-day. I take whatever is thrown at me.

“There are hundreds of staff here and for me to get nominated was a shock. My friends kept asking, why me? I say I don’t really know, that they should ask Cathy.”

Spend time with my grandchildren and family

Diana, Princess of Wales — because she did so much for working class people and charities — George Best and Gilbert O’Sullivan