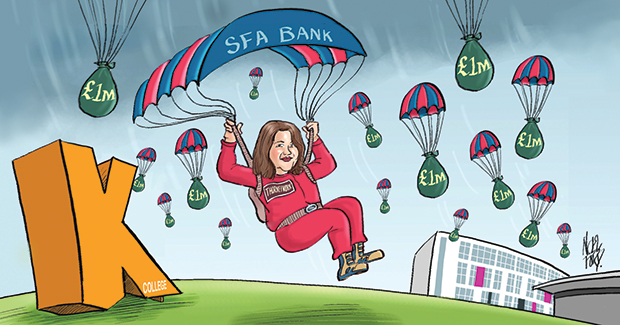 A struggling Kent college that is being broken up following a “failed merger” owes the Skills Funding Agency at least £15m, FE Week can reveal.

K College had received £3.2m in agency advances by November last year, on top of £11.7m of Invest to Save funds.

The situation is revealed in confidential minutes from a college meeting in December where it says the funding gave “a total debt to the agency of £14.9m”.

Principal Phil Frier said the agency’s “financial support” had allowed the college, whose agency allocation for the current academic year stands at £11.9m, to keep going as rival providers bid to take on its business.

An agency spokesperson said: “It is our priority to ensure funds are available for learners, so that they remain protected and can continue their learning with no
disruptions while the competition process takes place.”

The break-up of provision comes after the college, which was formed after a merger between West Kent College and South Kent College in 2010, ran into debts of £6m and was issued with a notice of concern by the agency.

However, the agency declined to say whether the debts would be transferred to the winning bidder.

“The competition process will run in two stages. The first stage invited expressions of interest and the second stage will invite selected organisations to submit a full tender for the future provision delivery requirements,” said its spokesperson.

“The prospectus sets out the financial position in relation to the commercial liabilities attached to each of the assets.

“We are not able to share any further information at this stage as this could potentially compromise the tendering process.”

News of the money owed to the agency comes just weeks after chief executive Kim Thorneywork revealed in the annual accounts that its current academic year budget of £4bn had been managed to within 1 per cent.

Mr Frier, who became K College principal in January following the resignation of Bill Fearon, said: “Obviously, K College is in the middle of a difficult period, and we are grateful to the agency for its financial support enabling the college to continue to provide teaching and support to our 13,000 students.

“I am pleased to say that we have now stabilised the situation and the college will be operating a break-even budget in 2013-14.

“The agency continues to run the competition for the provision of skills in the areas that K College serves.

“We understand the expressions of interest will be assessed over the coming weeks and those providers selected will progress to the invitation to tender stage in July.”

Seven parts of the college are on offer: 16 to 19 provision in Dover or Folkestone, or Ashford, Tonbridge and Tunbridge Wells grouped together; apprenticeship and 19+ provision in the same three areas; or Higher Education Funding Council for England directly-funded provision at Ashford and Tonbridge.

Fifty providers had signed up to attend open days on May 22 and 23 at two of the college’s five campuses.

While the procurement was running, the agency declined to comment on the interest it had received about taking on the college provision.

“We reserve the right to maintain this position throughout the process,” said the agency spokesperson.