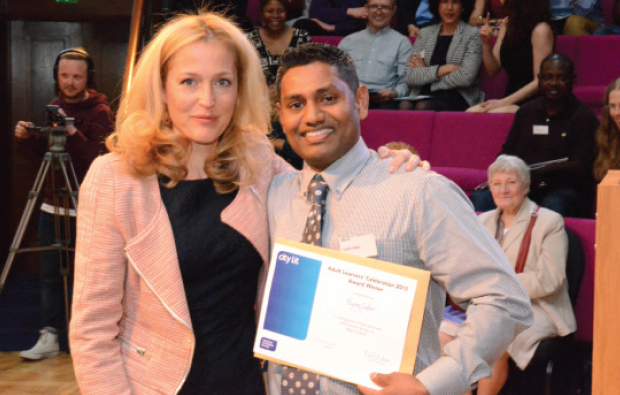 Dozens of adult learners enjoyed a touch of Hollywood glamour as they collected prizes at an annual awards bash in London.

Gillian Anderson, who played FBI special agent Dana Scully in The X-Files, handed out certificates at the City Lit ceremony.

More than 30 awards were handed over, including two special presentations to two “outstanding learners”.

They went to 45-year-old Usman Choudhry, who has overcome a stammer having taken a number of speech therapy courses, and Jason Putman, 39. He had been homeless for more than 20 years, before studying for a level two certificate supporting vulnerable people.

“My time at City Lit has given me insight and the tools to work with homeless and vulnerable people,” said Jason.

Deputy principal Nick Moore said: “Every year we do these events and every year they’re terrific — a real reminder of why we do what we do.”