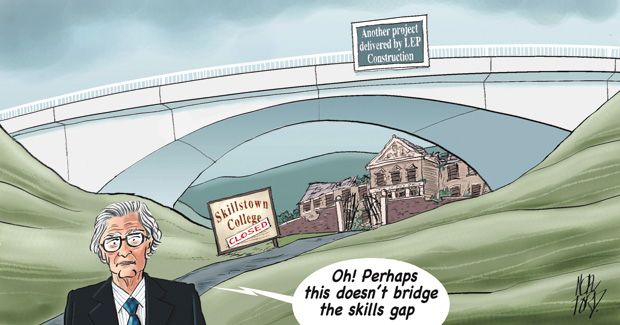 UPDATE: The government today left the door open for the introduction of a single funding pot, containing the adult skills budget, for local enterprise partnerships.

Government money for skills could be spent on “building bridges or community centres” if proposals for local enterprise partnerships are approved, the Association of Employment and Learning Providers (AELP) has warned.

Lord Heseltine’s recommendation for partnerships to bid from a central pot of government cash, including the adult skills budget, came under fire ahead of an expected announcement on his plans in this week’s Budget.

The association has submitted its views to the all-party parliamentary group on local growth, local enterprise partnerships and enterprise zones.

“We believe partnerships have a role to play in skills, but this should be advisory only and not as part of the mechanism through which funding is routed,” the association told the group.

It added: “The proposal to move adult skills budgets under partnership control is . . . mistargeted.

Without ring-fencing there would be no guarantee that skills money would be spent on skills.”

“As the adult skills budget diminishes, the arrangements for deploying it need to be made simpler rather than more complicated so that the overhead cost as a proportion of the budget is reduced.

“If partnerships were given these budgets without ring-fencing there would be no guarantee that skills money would be spent on skills.

“It would be a backward step to move to a regime where 16 to 18-year-olds did not have apprenticeships as an option as a LEP had decided to invest the funding, for example, into building bridges or community centres.”

Lord Heseltine’s proposals, set out in his 228-page No Stone Unturned report launched last October, made the case for a major rebalancing of responsibilities for economic development between central and local government, and between government and the private sector.

The former Deputy Prime Minister told MPs on the Business, Innovation and Skills (BIS) Select Committee last month that the government had already “accepted the principle” of his single pot.

His report was released just over a month after the Association of Colleges warned that partnerships were failing to take advantage of the “fantastic” education resources offered by colleges.

Its report said there was “patchy” engagement between the two, with a lack of college representation on partnership boards and a lack of understanding of the role that FE played in economic growth.

A spokesperson said its governors’ council was writing to chairs following talks with BIS officials to encourage governing bodies to drive closer engagement with partnerships.

But David Frost, chairman of the Local Enterprise Partnership National Network, said: “Unquestionably, the relationship with skills is right at the top of partnerships’ agenda. They understand the need to engage with FE and higher education — they are central to the work partnerships are doing.”