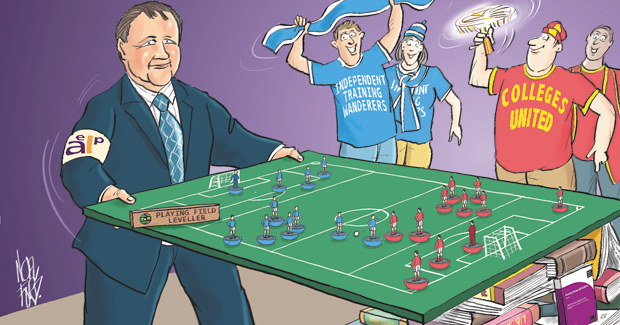 Warm tributes have been paid to Association of Employment and Learning Providers (AELP) chief executive Graham Hoyle after the announcement of his retirement.

The 66-year-old is expected to step down this summer after 11 years at the helm having achieved “more of a level playing field between colleges and independent training providers”.

Martin Dunford, AELP chairman, said there had been “growth and success” with Mr Hoyle at the top, adding: “He will be a hard act to follow.”

Paul Eeles, Emfec (formerly East Midlands Further Education Council) and ABC Awards Group chief executive, worked under Mr Hoyle for five years from 2005 as AELP director of sector reforms. He said Mr Hoyle had his “utmost admiration for all that he has achieved as the AELP chief executive.”

“One of his achievements will have been advocating and achieving more of a level playing field between colleges and independent training providers,” said Mr Eeles.

He added: “Graham’s strategic thinking, influencing of ministers and officials, warmth and humour will be greatly missed. I have very much valued his guidance and support over the past 11 years. I wish him all the very best.”

Mr Hoyle’s retirement follows a career that includes 20 years with the Employment Service before a move in the mid-1980s to the Training Agency, first as area manager for Devon and Cornwall, then for Gloucestershire and Wiltshire.

He has been very effective in ensuring the role of the independent provider is fully appreciated and recognised as fundamental to the success of the skills system.”

Mr Hoyle, a grandfather, was also chair of the TEC National Council’s Education and Training Committee, before the AELP came knocking in 2002.

His contribution to the skills sector was recognised in 2008 with an OBE in the Queen’s Birthday Honours for services to training.

Association of Colleges chief executive Martin Doel said it had been a “privilege” working with Mr Hoyle.

“Graham has taught me much and where we have disagreed, it has been in a spirit of open discourse. But in the majority of circumstances, his wise leadership has enabled our two organisations to forge alliances in key policy areas that I think have served our respective members and students well,” he said.

Susan Pember, director of FE and skills investment at the Department of Business, Innovation and Skills, said: “Graham really understands the importance of having a strong national apprenticeship programme and has been an incredible ambassador for apprentices and apprenticeship providers. He has been very effective in ensuring the role of the independent provider is fully appreciated and recognised as fundamental to the success of the skills system.”