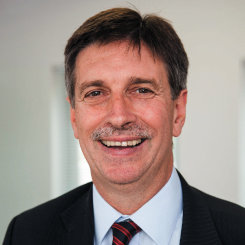 Peter Roberts was happily following in his father’s footsteps as a professional footballer when a nasty tackle threw him off course. His dad, Harold, made history at Chesterfield FC when he was signed by Birmingham City for a then record £10,600.

Peter also joined Chesterfield in his teens. But his time on the pitch came to an abrupt halt in his early twenties when he broke his leg twice and was told that he needed to think of a new career.

“I’d never seen my life as anything other than playing football. I’d always been reasonably good and once I’d joined Chesterfield as a schoolboy I didn’t entertain doing anything else,” the former midfielder says.

“It was hard when I broke my leg. But there’s no point moping, you’ve got to get on. And because I was waiting and waiting for my leg to heal, it was a slow realisation that I wouldn’t be able to play professionally again, rather than a moment when it all came tumbling down. When life deals you certain cards you have to cope, you can’t feel sorry for yourself.”

Becoming a PE teacher seemed a good next step and he applied to do a PGCE at the University of Liverpool, where he had completed a degree in economics while he had been at Chesterfield. But it wasn’t the most practical of decisions.

“I did my whole teaching practice with my leg in plaster,” he says. “It was meant to heal by the end of the first term, but never did, so I spent my time refereeing and hobbling about in the gym. You wouldn’t get away with it now.”

When he graduated in 1978, he taught  PE and economics at West Derby comprehensive in Liverpool. He was also back in his football boots playing part-time for Southport, a non-league side.

“Life changed a lot in a few years, from having my future clearly mapped out to suddenly everything becoming uncertain. But I ended up in a place where I could play football to a reasonable standard and teach — I got the best of both worlds,” he says.

“I still harboured some thoughts about playing professionally, but I enjoyed teaching. Hindsight is a wonderful thing; if it had happened a few years later then it would have been a lot harder, but I was still young and open to new things.”

Roberts, who in December was elected chair of the 157 Group, which represents the top colleges in the country, grew up in Chesterfield with his older brother Alan. Dorothy, his mother, was a clerk in the finance department at a local newspaper; after his retirement from football, Harold, who died in 2007, coached young players at Chesterfield..

“I saw two quite different sides of life growing up,” Roberts says. “I went to a grammar school where higher education was the main route people took, but in the football team it was another story. I hate hierarchy, the idea that some people are better than others. Some of the players in the team weren’t academic, but put them on a football pitch and they’ll see things no one else ever will. Everyone brings different skills to the playing field. I hate snobbery and, as I get older, I get more intolerant of people trying to impose hierarchy.”

I hate hierarchy, the idea that some people are better than others”

Roberts, now 57 and the father of two (he has been married for 31 years),  decided to go into further education when he was at West Derby and was asked to run a business course with a local college. He left the school in 1983 to become a lecturer in leisure and recreation at Stannington College in Sheffield.

“My decision wasn’t based on very good reasons,” he says, laughing. “I was attracted by having my own desk, dedicated non-teaching time to plan lessons and paid overtime. You never got any of that in schools. It seemed a much more grown-up and sensible world.”

When he began teaching at the college he found he enjoyed being in a more job-focused environment.

“I could really see the impact we were having,” he says. “In the area a lot of steel workers were losing their jobs and the government paid for them to do courses at the college. Being able to help them get back into work was very rewarding.”

After four years at Stannington, he moved to Selby College as part of the senior management team. In 1992 he became vice-principal of Rotherham Sixth Form College and later York College.

In 1997 he moved as principal to Stockport College — and in six years helped to turn it around from being judged by Ofsted as inadequate to being awarded outstanding.

“It even makes me emotional now,” he says. “Once Ofsted had gone, we got all the staff together to tell them the grade and I asked how many of them had been at the college when it was judged inadequate — loads of hands went up. You’ve got to believe in people and make sure they know it’s OK to ask for help.

“It was a fantastic feeling. After all the usual celebratory stuff I went back to my office . . . the relief was palpable. You just think ‘wow’. We had all worked so incredibly hard.”

Roberts joined Leeds City College in 2009, just after its merger with two other institutions to form one of the biggest colleges in the country — it has an annual turnover of more than £90 million, 1,700 staff and 40,000 students. In May this year Ofsted gave it a “good”, with its report calling the principal “inspirational”.

“Everybody has good and bad days, but it’s a nice confirmation of all the hard work we’ve been doing,” he says. “These two inspection results are my proudest achievements.”

He now admits that every morning before Ofsted arrived he would play the anthem for Liverpool Football Club.

“All the staff were laughing at me, but I just needed to get my fix,” he says smiling. “My dad was a Scouser, he brought me up as a Liverpool supporter and the words are something I hold very dear. It sums up my outlook on life and how you cope when stuff gets chucked at you — when you walk through a storm hold your head up high…walk on, walk on, with hope in your heart.”

The Partner by John Grisham

A variety of interests, including sport, reading and travel

The ability to add a few more hours
to the day