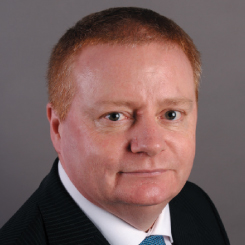 When he was 24 Neil Bates was married and wanting to start a family.

He saw decades of job security ahead of him at the civil service where he’d been for two years securing providers to retrain the unemployed.

But there was something missing: the chance to make a real difference. So, spotting a job running a £3m government programme to train people for employment, he gave up that security and became general manager of Estuary Training in Southend, Essex.

It was a rocky start. His office was a classroom at a local college, he had one member of staff — and no idea what type of training he should deliver.

But, nearly 25 years later, the company has grown into the education and skills charity Prospects Learning Foundation. And he’s been its chief executive for 15 years. At the end of its first year the organisation had one centre, 12 staff and 80 apprentices. It now has five centres, 250 staff, 2,000 students and a turnover of £11m.

“It felt enormously risky,” the 49-year-old says now of his decision as a 24-year-old.

“My father gave me the lecture of all lectures about my pension and job security, but it was unquestionably the right decision.

“I was frustrated by the civil service’s age and time-based approach to developing people. I had ambitions to become a higher executive officer and in my performance review my manager said, good Lord, it took me 15 years to get there. It wasn’t going to matter how hard I worked.”

Becoming a general manager at 24, however, was a big leap.

“Frankly, I had no idea at all how to manage people. I had to try to establish credibility pretty fast, because I was dealing with people who were far more experienced than I was. I grew up very quickly — it taught me not to try to impose authority over capability.”

Bates was brought up in Torpoint, South West Cornwall, with his three sisters, Jackie, Alison and Gill, and brother Mark.

“Mum was a remarkable lady,” he says.

“She brought up five kids almost singlehandedly, as my dad was away with the Navy as a chief petty officer, while working full-time as an English teacher. She also had a disability caused by the curvature of the
spine from contracting polio in her early 20s.”

“One was to go in the Navy dockyard at Plymouth and the other was to go into agriculture, or some other semi-skilled employment,” he says.

“There was no university within 50 miles and very little access to further education.

“The culture was very much that you left school at 16 and went straight into work. There was little aspiration in terms of doing anything else.

“I wasn’t particularly academic. I thought school was somewhere to go to meet your mates rather than to study. I wasn’t interested in applying myself … the teachers had decided how I was going to behave, and so I lived up to it.”

Frankly, I had no idea at all how to manage people”

But when he was 13, his father left the Navy to retrain as a social worker and the family moved to Essex. In the West Country he had been in special needs’ sets for some subjects, but his parents told his new school that he’d been in the top groups.

“This was in the day when schools didn’t share information, so I was placed in top sets. The school knew nothing about my background and had a completely different set of expectations. It had a big impact on me; I left school with good A levels,” he says.

“I didn’t come from a deprived background, but once you’re in the education system it’s very difficult to change expectations and the outcome. It’s only because we moved somewhere new that I got the grades I did.

“It’s why we spend very little time at the foundation worrying about what our students have done at school. We know that if you put young people in a different environment that’s more practical than academic you can get a transformational change — we’ve had teachers come here and simply not be able to believe how their students are behaving, because at school they would be running around the corridors.”

He’d been chief executive at Prospects for four years when, in 2000, he decided that it was time to take a risk and create something that would have a really big impact.He set his sights on a new regional college
for skills in Southend, raising £14m for the project. But before plans went ahead in 2006 he found out about Thorpe Bay, a secondary school in the area that was due to close after years in special measures.

Plans for the new college were put on hold and the charity invested the £14m, raising another £8m, in creating Futures Community College for 11 to 19-year-olds on Thorpe Bay’s site.

It’s the first institution of its kind in England and, as well as providing GCSEs and A levels, also offers vocational training.

“It felt like a really brave thing to do,” says Bates, who lives in Benfleet, Essex. “In no way was it an easy option. There were groups of people who said it shouldn’t be done — that the kids should just be distributed to schools in the area. People also thought it could be a distraction from what we were doing as a training provider . . . and then there were a whole mass of structural issues. But it’s one of the things that I’m most proud of.”

He hopes the college will be good in two years, outstanding in five.In the past five years Prospects has invested £46m in new buildings and equipment. Its five centres train young people in a range of skills
— from aviation engineering and carpentry to hairdressing and construction.

This month it opened a new £10m centre in Basildon dedicated to skills for building services, such as plumbing. In March next year a green technology training centre will be unveiled.

“It’s a privilege doing something that makes a difference,” he says. “Looking back at how the charity has grown makes me feel in awe of everything that’s happened. I hope that in five years we have a network of
centres across the South East.” With nearly 25 years at the charity under his belt, he’s looking to build on his work on national policy — he’s currently a trustee at education charity, the Edge Foundation.
“There’s a desperate need to look again at how we procure education and skills in this country,” he says. “There should be substantial investment in re-establishing the technical skills provision that we had until
the 1980s. And a proper pre-apprenticeship programme is seriously needed.”

He would also raise the school leaving age to 18 and give vocational and academic choices to students at 14. But the most important thing, he says, is to properly raise the status of technical vocational education.

A journalist or a lawyer

The power to make people be nicer to each other