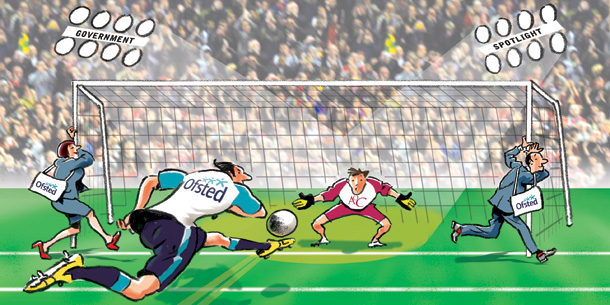 Ofsted has been accused of “moving the goalposts” for colleges following a damning annual report that pointed to a threefold increase in the number of colleges judged inadequate.

Association of Colleges (AoC) chief executive Martin Doel hit out at the education watchdog after its report highlighted how 13 colleges received the lowest possible grading in 2011/12, compared with four the previous year and how, for the second year running, no college achieved an outstanding grade for teaching and learning.

Ofsted further questioned college governance, monitoring of apprenticeships, the “relatively small” growth in the number of apprenticeships among under-19s and said there was a “real danger” that increased subcontracting would dilute quality.

But Mr Doel said that colleges had been doing what government asked of them and questioned the “transparency” of the new inspection regime — brought in from September — and the “relevant experience” of inspectors.

“If the goalposts are being shifted by Ofsted, we at least need to know the rules of the new game.”

“The annual report no longer represents a state-of-the-nation view of provision, but rather a snapshot of inspections that are now triggered by a risk-based approach. By definition this is skewed towards more negative results,” he said.

But he admitted that, “without doubt”, the report included difficult messages for the sector.

“Colleges are delivering what government has asked of them and we are interested to discuss how college performance might be better reflected in a wider basket of measures.

He further said that there was too little data in inspection reports to provide this transparency or the information required by colleges, parents, employers and potential students.

“We have further concerns about the relevant experience of some Ofsted inspectors and that the inspections do not give a true reflection of the whole of a college’s provision,” he said.

The wider Ofsted annual report was based on the findings of nearly 25,000 inspections of early years and childcare, schools, colleges and adult learning and skills.

It said that schools were improving, with year-on-year rises in the proportion of those rated good or better.

“Overall, the quality of provision in the learning and skills sector is not improving,” said the report.

“Almost 1.5 million learners are being supported by providers who are not yet good and some colleges have now been satisfactory for over 10 years.”

Chief inspector Sir Michael Wilshaw called on the government to “shine a spotlight” on the FE sector, branding it a “real concern”.

An Ofsted spokesperson defended the revamped inspection reports, saying they were more “user-friendly,” containing bullet points rather than lengthy pieces of text, declined to comment on the AoC statement.