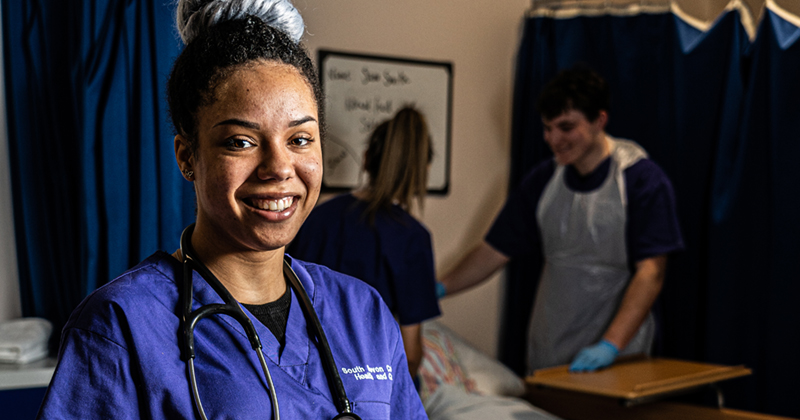 The first college in the country to have its own nursing provision approved for direct delivery has been revealed today.

South Devon College has gained Nursing and Midwifery Council (NMC) approval and can now deliver its own nursing associate programme rather than having to partner with a university.

The NMC is the regulator for nursing and midwifery professions in the UK and has traditionally only given higher education providers permission to deliver qualifications for the industry.

South Devon College is one of only nine colleges nationwide that has its own foundation degree awarding powers, which made the move possible. It applied for Approved Education Institution (AEI) status with the NMC two years ago. No other colleges have applied for approval to date.

Maria Woodger, assistant principal at South Devon College, described the success following a “rigorous process” as a “fantastic achievement” that means “so much to the college, our students and the wider healthcare community”.

As the college has foundation degree awarding powers, it can also offer the level 5 nursing associate apprenticeship.

Lucy Hunte, the national programme manager for apprenticeships at Health Education England, said she was “delighted” to see a college move into the direct nursing delivery space.

“There are other examples across the country of partnerships with employers and HE and we recognise that FE colleges have apprenticeship expertise and partnerships like these will allow the NHS to achieve our ambitious targets for the level 5 nursing associate apprenticeship and progressions onto the registered nurse degree apprenticeship,” she added.

Alexander Rhys, NMC’s assistant director of professional practice, said this was a “fantastic step” for both South Devon College and the council in “helping aspiring professionals achieve the nursing associate qualification in the most safe and effective way possible”.

He added that he hopes “they will be the first of many colleges seeking direct approval to run a nursing associate programme”.

The college said that since the Covid-19 pandemic, applications to nursing courses nationally have increased by 32 per cent in the last year, with more than 60,000 people interested in nursing as a career.