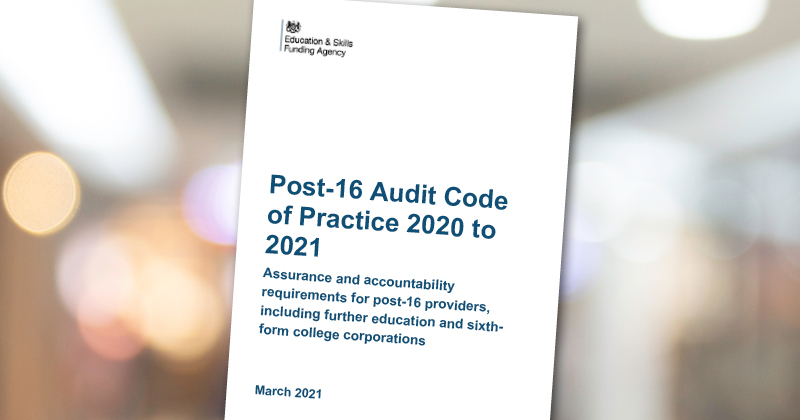 The government body responsible for funding assurance appears to have lost confidence in itself.

The Education and Skills Funding Agency is requiring all external auditors to conduct a funding audit this year, before signing off on the annual college financial statements.

News of the significant change came buried in the Post-16 Audit Code of Practice for 2020 to 2021, published by the ESFA this week.

One of 19 “changes” stated the ESFA year-end funding statement “does not constitute assurance over the funds earned by the college”.

In previous years, external auditors signed off college accounts without checking the accuracy of income claims received from the main funding grants generated through the Individualised Learner Record (ILR) returns, because the ESFA provided the assurance.

Julian Gravatt, deputy chief executive at the Association of Colleges and former college finance director, told FE Week the change “risks creating a last-minute scramble by colleges and auditors to carry out extra work in summer 2021.

“Colleges aim to comply with high audit standards but we don’t agree with the ESFA decision to introduce this change two-thirds of the way through the year.”

And in an email to all AoC members seen by FE Week, Gravatt says: “The implication of this change is that external auditors will now carry out more work this summer and early autumn to ensure compliance with funding rules.

“In effect this extends the funding audit to all colleges this year – at their own expense.”

According to several college accountants who spoke to FE Week, the responsibility for funding audit being passed from the ESFA to colleges presents a number of challenges.

This is likely to present resourcing challenges announced so late in the year and raises the prospect of additional costs for colleges.

‘This extends the funding audit to all colleges this year’

However, Gravatt said he hoped external audit firms would “handle any extra work within agreed and fixed budgets”.

It also remains uncertain whether other funding bodies reliant on the ILR returns, such as mayoral combined authorities, will make similar demands.

And despite the move from the ESFA to require the extra assurance work, there has been no suggestion they will scale back the number of audits they conduct themselves.

Gravatt was also keen to point out that this late change appeared to go against broader government plans to reduce bureaucracy.