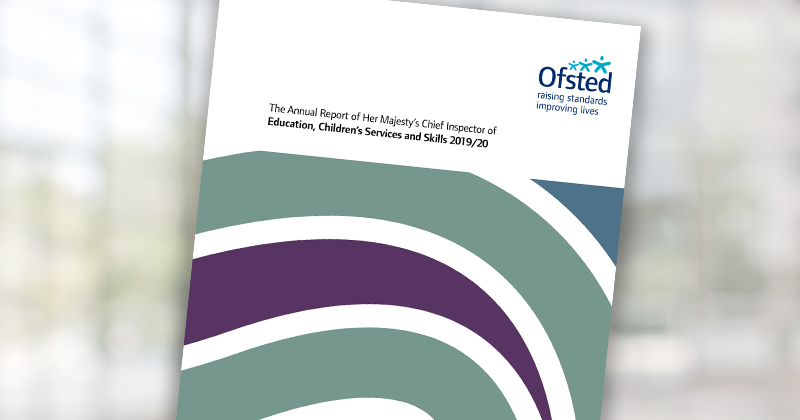 Ofsted has today published its annual stocktake of education for the 2019/20 academic year, which saw inspection activity largely disrupted due to the Covid-19 pandemic.

FE Week has the key findings for the FE and skills sector.

Ofsted inspected 26 of the 46 colleges formed from new mergers since 2015 and found that while 65 per cent, or 17, were either ‘good’ or ‘outstanding’, the others were all judged as ‘requires improvement’.

“Currently, this grade profile is lower than the original profile before the mergers,” the report reads, after nearly 100 colleges have been through mergers following the FE Commissioner’s series of area reviews in 2015.

“But nearly half of the merged colleges are yet to be inspected,” it reasoned.

FE Week reported in October that inspection results for the college sector at the end of 2019/20 fell for the first time in three years after a substantial number of merged colleges received a grade three.

Ofsted’s report today reinforces that finding, reporting the proportion of general further education colleges judged good or outstanding has slipped from 78 to 75 from 2019 to this year.

Ofsted has shone a light on the “serious financial implications” Covid-19 has for the further education and skills sector.

The report reads: “The pandemic has led to growing concerns over sustainability in parts of the FE and skills sector,” because most colleges are at least partly-dependent on apprenticeship levy funding, which is not a guaranteed source of revenue.

“Hundreds” of independent providers are dependent on funding from the Education and Skills Funding Agency and other schemes to provide them with cashflow and continuation, Ofsted has said.

So, their viability depends on businesses paying for training services, however some of those customers have gone or will be going out of business, or reduce their training.

Although government funding for capital expenditure and the National Skills Fund, due to launch next April, “should help colleges to re-balance their finances to an extent,” the watchdog has warned “the full impact” of the decrease in apprenticeship revenue “remains to be seen, but some providers have already ceased training”.

Ofsted has said it will monitor developments in the market “because sufficiency of provision is central to ensuring children and young people receive the education and care they need”.

The House of Commons Public Accounts Committee heard last week from the Education and Skills Funding Agency that 64 colleges were at risk of running out of cash, and the government was on course to spend £70 million on emergency funding for them this year.

The quality of the apprenticeships is the biggest warning from Ofsted in today’s report, with it being named as the “weakest” provision in the further education and skills sector.

One in ten apprenticeship grades are currently judged ‘inadequate’, a number the watchdog calls “clearly too large”.

Nearly a quarter of providers which received early monitoring visits in 2019-20 had at least one ‘insufficient progress’ judgement, which in many cases was due to weak leadership and a lack of co-development with employers.

However, some apprentices have seen their provision “disappear entirely,” whether that’s on- or off-the-job, the report reads, as 36 per cent of them have been furloughed, while eight per cent were made redundant and 17 per cent had off-the-job training suspended.

Apprentices on standards received a “more tailored and broader curriculum” than those studying frameworks, the report continues.

Online education only a ‘partial’ solution

The inspectorate conducted a review of online education in FE providers during Covid-19 lockdown and found that this can “only ever be a partial solution to ensuring a good quality of education and training where education cannot happen face to face”.

Ofsted warned that online education needs to be “well integrated” into the provider’s curriculum offer “as a whole and adapted to the learning needs of learners” in order to work effectively, with “suitably trained teachers”.

Some learners “admitted to being frequently distracted”. Overall, Ofsted found that learners “miss the face-to-face contact of the classroom, not only for social interaction but also for the instant feedback and opportunity to ask questions that it provides”.

The inspectorate raised the issue of digital poverty after a recent Association of Colleges survey found up to 100,000 FE learners do not have a suitable device or internet connection to learn from home.

To avoid these learners falling behind, the Department for Education “need to invest in this as well as in a suitable virtual learning environment and staff training”, Ofsted said.

While private providers have been shown as the worst-performing provider type, with 74 per cent rated ‘good’ or ‘outstanding’, community learning has been proven to be the best.

A total of 92 per cent of community learning and skills providers were judged either grade one or two last year, moving up from 91 per cent last year.

Colleges have seen their proportion shift downwards from 78 per cent last year to 75 per cent.

Overall, the number of FE providers found to be ‘good’ or ‘outstanding’ by Ofsted sits at 80 per cent – a decrease of one percentage point compared with last year.