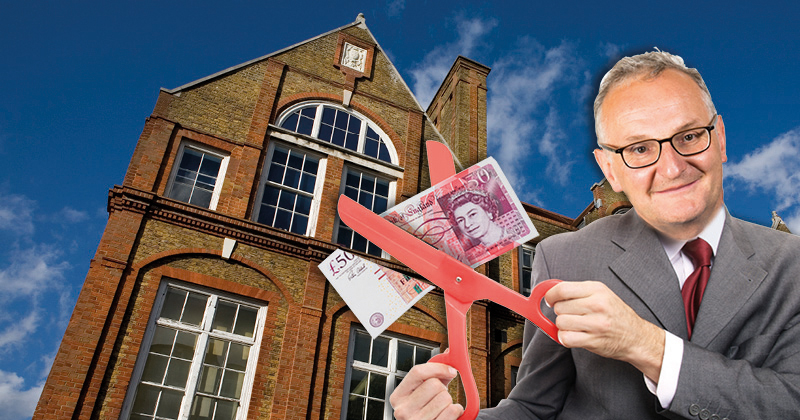 Ministers are drawing up plans to extend a controversial cost-cutting advice scheme for schools into the FE sector.

According to a job advert posted last month, the Department for Education is recruiting an individual to “scope and design a brand new programme of work” aimed at “strengthening efficiency and value for money in further education”.

This would form the “next phase” of the department’s School Resource Management (SRM) strategy which will undergo a “formal relaunch” and form a new division in the DfE in early 2021.

The advert stated this is a “fast-paced, high-profile” area of work and a “top policy priority” for ministers and HM Treasury.

FE Week’s sister paper Schools Week revealed in August 2018 how the DfE was to spend £2.3 million on up to 250 money-saving advisers who were parachuted into struggling schools to help them cut costs. This was part of a trial led by then-academies minister Lord Agnew, who is now a minister in the Treasury and Cabinet Office.

But the SRM consultants caused controversy, with Schools Week reporting one school, for example, being advised to replace experienced teachers with support staff on term-time contracts, while another was urged to limit lunch portions for pupils.

An evaluation of the trial was published in January and revealed how during the visits, advisers found savings of £35 million across 72 schools and academy trusts. But they failed to identify savings at more than one in ten of the schools they visited.

The DfE would not reveal any more

details of how the SRM programme might work in further education. A spokesperson would only say that the department is “exploring how this approach can be applied to all parts of the sector to ensure every penny counts towards excellent educational outcomes for all”.

Stephen Morales, chief executive of the Institute of School Business Leadership (ISBL), which accredits SRM advisers, told FE Week it was always Agnew’s goal to expand the programme into all parts of the education sector, but said the move into FE was at “very, very early stages”.

“The DfE is developing the thinking that they developed for the mainstream schools sector into FE but it is super early,” he said.

“I don’t think they know what the controls would look like yet – so will it be retraining the existing army of SRM advisers, or will it be seeking those that have direct experience in the FE sector? They are a long way away from that.”

He added that that resource consultants are one aspect of the SRM strategy, which includes a “whole series of toolkits and benchmarking information that schools can use to compare themselves with similar schools”, that FE could get involved in.

Morales also said that the “formal relaunch” of the SRM strategy for schools is also in its early developments, and discussions around how much extra funding will be thrown at it or if any more advisers will be recruited are yet to happen.

He added that the emphasis on the SRM strategy has shifted under Lord Agnew’s successor Baroness Berridge away from the “cost-cutting, efficiency type narrative to one of reinvestment – so ‘let’s see where we can find potential savings and let’s look at resource optimisation to put back into the classroom’.”

But Julian Gravatt, deputy chief executive of the Association of Colleges, warned about the dangers of adding further oversight to an already complex FE system.

“The school resource management model is collaborative because it uses existing finance staff to advise their peers on good strategies,” he said.

“However, we already have a complex oversight, intervention and support system in colleges and the 100 published FE commissioner reports are full of financial management advice already.

“The priority in the next 12 months should be to simplify the external scrutiny and sort out funding arrangements so that those running colleges can get on and do what they need to do in the national interest.”

Julie McCulloch, director of policy at the Association of School and College Leaders, said that while the SRM scheme was “often helpful in schools” there were “misgivings about some of the advice given, and it will be important to ensure that lessons have been learned from this experience”.