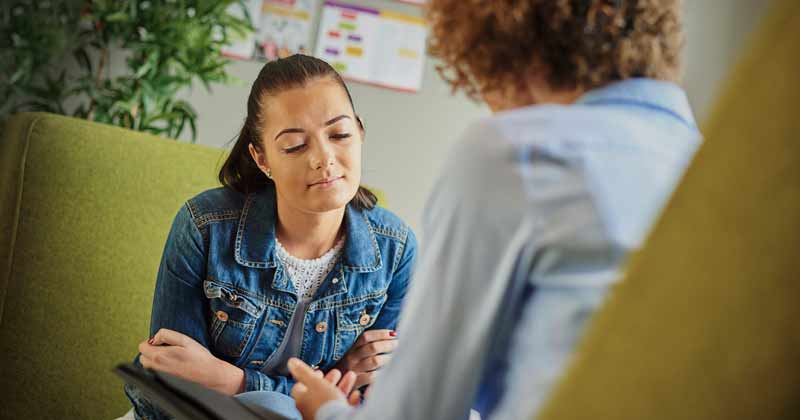 Less than half of the schools in the government’s multi-million pound network of careers hubs have met a target for providing “encounters with further and higher education”.

A report published today by the Careers and Enterprise Company (CEC) shows that while more schools are meeting the eight Gatsby benchmarks for good careers guidance, progress towards full compliance remains slow.

“Encounters with further and higher education” is the seventh benchmark and sets a target for every pupil by the age of 16 to have had a “meaningful encounter with providers of the full range of learning opportunities, including sixth forms, colleges, universities and apprenticeship providers”, which should include the “opportunity to meet both staff and pupils”.

But today’s CEC data shows that just 47 per cent of the more than 2,000 schools in the quango’s careers hubs fully achieved the target by March 2020.

The findings chime with concerns from the education select committee about non-compliance with the Baker Clause – a law introduced in January 2018 that stipulates schools must ensure a range of FE providers have access to pupils from year 8 to year 13 to provide information on technical education and apprenticeships.

The committee questioned Ofsted chief inspector Amanda Spielman on this issue during a hearing this week. Spielman said inspectors have found examples of non-compliance in schools and pledged to give careers guidance the “attention it deserves” when inspections restart.

Asked why they thought schools were struggling to provide encounters with FE providers for pupils, a CEC spokesperson said: “There has been sustained improvement in the number of young people having encounters with further and higher education. This improvement represents a threefold increase over two years.

“These are rigorous and demanding standards for schools and colleges. In order to achieve the criteria, they must achieve a range of measures such as meeting a full range of FE and HE providers and information about a broad range of apprenticeships.”

Today’s CEC report shows that overall national performance towards all eight of the Gatsby benchmarks has doubled since 2016/17 – schools and colleges have moved from achieving 1.87 of them on average to 3.75 as of March 2020.

Progress is higher when looking only at schools and colleges in career hubs – they are achieving 4.8 of the target on average.

The other benchmarks that appear to be proving most difficult to meet include “a stable careers programme” and “addressing the needs of each student”. 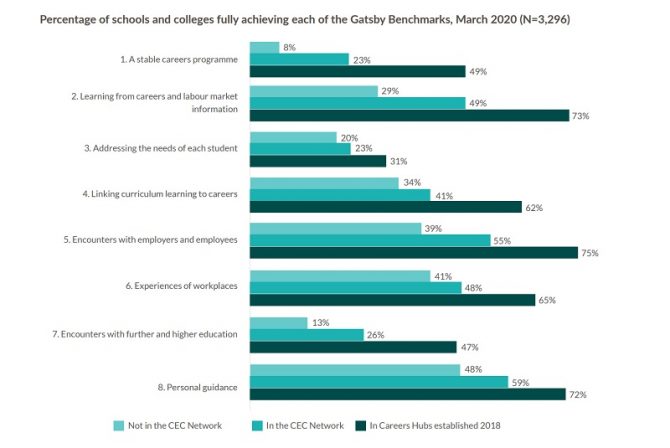 The CEC has come under fire in recent years from high-profile people in the sector like education select committee char Robert Halfon, who has accused the quango of making little progress in improving careers education in England despite receiving millions from the public purse.

An additional 882 schools and colleges joined the programme in September 2020 backed with an extra £2 million.

Figures obtained by FE Week’s sister title Schools Week last year revealed that the CEC itself had received almost £100 million since launching in 2014 to boost provision.

They include a “hub lead” who works with school and college leaders to provide “strategic support” on their careers plan and access to business networks, as well their delivery against the Gatsby benchmarks.

A CEC spokesperson said: “The evidence shows performance on this measure is significantly better in CEC’s Careers Hubs and network, proving that targeted investment has accelerated progress.”