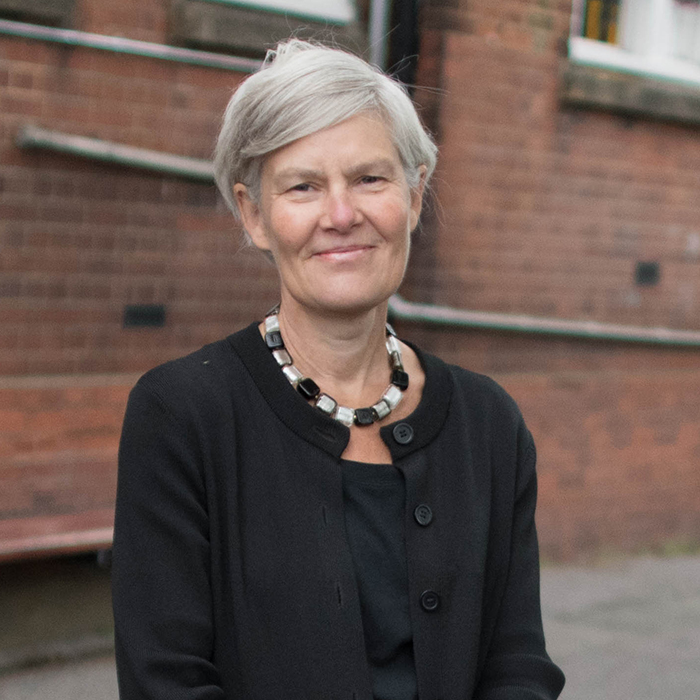 Three months into the job of shadow education secretary, Kate Green reveals she is a ‘policy geek’ who is most naturally at home advocating for others…

In many ways, the boots Kate Green must fill as shadow education secretary are big ones.

Both her immediate predecessors have powerful personal stories about social mobility that appealed to many. Angela Rayner, now deputy leader of the Labour Party, left school early, had a mum who couldn’t read or write, and went on to earn a seat in parliament against the odds. Her successor, Rebecca Long-Bailey, worked in a pawn shop and furniture factory before she became a solicitor. Both are northern women who were relatively young when they took the shadow education brief – Rayner was just 36 years old – and with their large personal followings, were touted for bigger things. 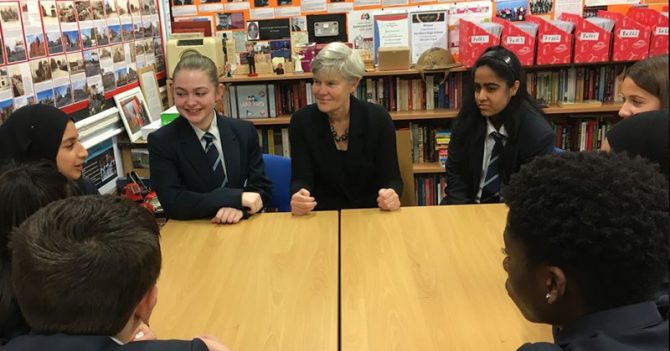 Green with students from Stretford High

You could see Edinburgh-born Green as the opposite. With parents who attended university, she doesn’t at first hand appear to have that compelling backstory of triumphing against the odds that politicians seem to crave (alternatively, that voters crave in politicians). And, as a former chief executive of Child Poverty Action, she already has the swathe of her career behind her – rather than appearing to be a new rising “star”.

But this may have big hidden advantages for the law graduate. A self-professed “policy geek” (much like shadow chancellor Anneliese Dodds, another native Scot), Green holds an opportunity to win over colleges with a grasp of detail that perhaps neither of her predecessors, who were arguably better at talking in broad brush strokes about helping the next generation of Rayners or scrapping academies, were best known for (although to be fair to Long-Bailey, she didn’t have long to prove otherwise).

Green has worked with children and families for years – she’s a former director of the National Council for One Parent Families – so the role is likely to mean more than just the next stepping stone of her political career. Were Labour to win the next election, Green’s character may set her up well to bed down and tackle the nitty gritty policy issues others have ignored.

But that’s potentially a long way off, and some problems are more immediate. At the end of last month, Green herself was in hot water when she said the Covid-19 pandemic was a “good crisis” which Labour shouldn’t let “go to waste”, leading to Boris Johnson claiming her words revealed “the real approach of the Labour Party”. Green is total in her self-condemnation. 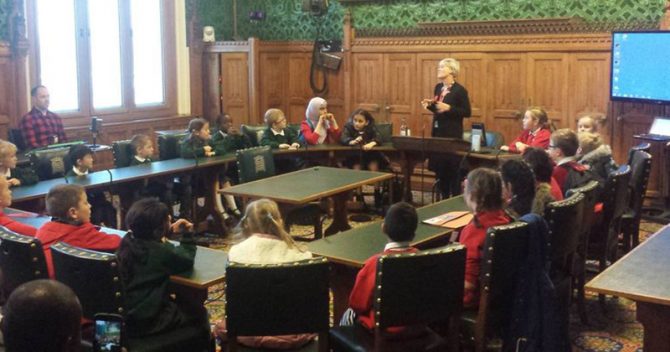 Green with students from Moss Park

Green seems to be a values- and details-oriented woman who is not out to amass a big personal following, but to nail her brief. She skirts over home life beyond childhood, and can’t lay hands on childhood photographs – suggesting she’s a private person. In that regard, she probably reflects her Scottish upbringing, one in which hard work and privacy were the norm (“I had no idea how my parents voted,” says Green). Her parents were from poorer backgrounds in west Scotland and had managed to become teachers, so education was seen as crucial. But a streak of rebellion grew in Green during that time, too.

One incident she remembers was her father, who was leaving his primary school headship for a teacher training college post, in conversation with a friend. “The friend asked, ‘Will your deputy [whom Green describes as an “amazing, formidable woman”] get your job when you leave?’ And my dad said, ‘Oh, they’d never give a school this big to a woman.’ I was sitting there thinking, ‘You have spent my entire life telling me I can be anything I want, and I’ve just heard you say to somebody else that actually I can’t’.” Green never told her father the impression the moment made on her, but says it and the lack of opportunity for women has stuck with her for decades. “I guess I’ve spent a lot of my career kicking back against that.”

First off, she left Scotland and arrived during the 1981 recession in London, where she would do 15 years at Barclays Bank. Her assessment is concise. “Banking wasn’t it, I didn’t enjoy it, and I wasn’t any good at it.” Why do it? Her parents recalled their own parents being jobless, including her grandfather, who would pick up work on the docks. Job security “was burned into my psyche”. Green now worries that in the upcoming recession, like her, young people could spend years just trying to find work they enjoy.

But a future direction began to form as the young Green reacted to homelessness in the capital under the Thatcher government by attending Labour Party meetings, which she “found a bit depressing”. But she persevered and eventually another party member, a teacher, suggested she stand for parliament. “I said, ‘Don’t be ridiculous, people like me don’t do something like that.’ But the idea stuck.” She stood for parliament in Tony Blair’s landslide 1997 election for the Cities of London and Westminster, a Conservative stronghold, and lost. That experience, however, “changed everything” and she left banking. “I went to work in the Home Office for a couple of years. I learnt more in those two years in the Home Office about how the country is really run than I had ever understood before.” Her main policy interest at this point was criminal justice, since her degree was in law and she’d been a magistrate.

Green then left the civil service to stand and lose an election again, this time for the Greater London Assembly in 2000. “By this time I’m 40 and I’m thinking, ‘Look, what are you going to do with your life now? You can’t spend the next ten years going around losing elections  ̶  get a grip’.” What did her parents think of this career move? “They hadn’t particularly wanted me to stand for election, they were nervous.” But when Green was elected in 2010 from an all-women shortlist to Stretford and Urmston in Greater Manchester, they were excited. The level of privacy at home is evident when she adds with a wide smile: “My mum came out to me as a Labour Party voter!” 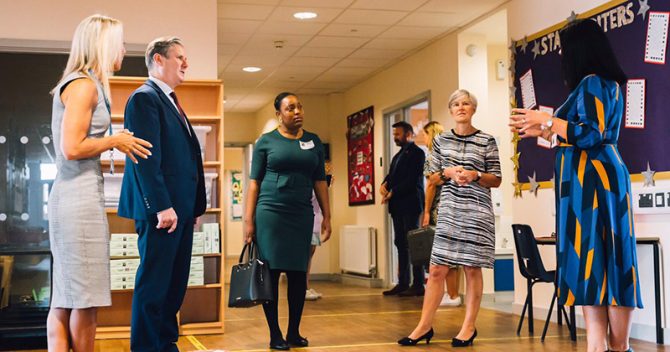 The delay to becoming an MP may have been fortuitous. By 2010, Green had racked up significant experience in two top social policy roles. Labour leader Keir Starmer has pointed to her role as former chief executive of Child Poverty Action (during the years when the Labour Party pulled almost one million children out of poverty) but less has been made of the job Green says was her “happiest”. As director of the National Council for One Parent Families, she got to support some of the most undervalued women in society. Clearly Green is highly irritated by people stereotyping vulnerable groups without checking their facts first. “Teenage single mums had been demonised… but this is the parent who stayed, not the parent who walked away. They are desperate to be role models for their kids.”

The role also gave her a unique insight into the struggles faced by many wanting to return to the workplace or education. Green was appointed to the then-National Employment Panel, which brought together industry leaders, FE providers and advocacy groups like hers to advise government ministers on labour market and skills policy. It led her to think hard about the advantages of devolution, which she says allows local policymakers “to link your social policies, your industrial and economic policies, and your skills and education policies together”. For instance, she calls the £300 million underspend of apprenticeship levy fund “absolutely ridiculous” and suggests again that greater devolution could allow for a more planned approach to training and skills strategy, “to build closer, purposively designed relationships between local employers and local colleges”.

The same advocacy drive Green had for single parents is also evident in her support for Roma, gypsy and traveller children (she chaired the all-party parliamentary group). She recalls being elected when Eric Pickles was secretary of state for communities. “He was announcing a cut in funding for traveller sites, and at the same time wanted to tighten up planning laws. And I thought that was stupid policy, and I don’t like stupid policy, so I got annoyed.” She started “asking questions” and has been trying to tackle prejudice against the community since. 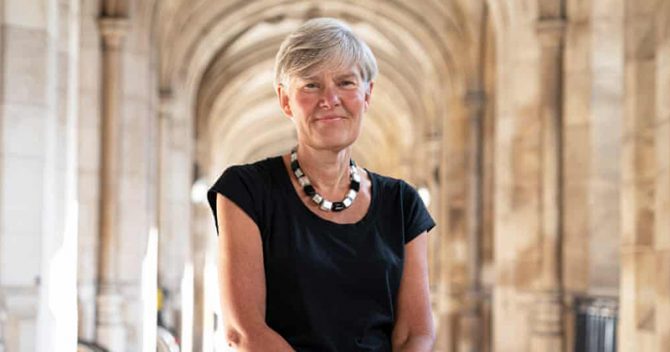 Green at the Houses of Parliament

The most telling line here is “I don’t like stupid policy”. Green largely speaks with confidence about FE policies, which is likely to be, at least in part, because she’s well briefed. One of her closest advisers is Nick Wright, who was by Gordon Marsden’s side throughout his time as shadow FE minister.

It’s also why when I press Green for details of her policy plans on contentious issues, such as scrapping Ofsted, she takes a cautious and pragmatic tone, saying these will be “reviewed”. Labour needs someone who can present policy-tight answers to big visions lacking clear plans, such as its proposed “National Education Service”. But as a geek officially annoyed by stupid policy, she won’t be drawn before she’s done the research. “I’m in listening mode.” She does share, however, that a big interest of hers is “inclusion” and reducing inequitable outcomes for disadvantaged learners.

In a sense, Green is a shadow education secretary who is most naturally at home with being an advocate for the vulnerable. Her challenge now will be to combine that with detailed policy plans that have perhaps been lacking in recent years.