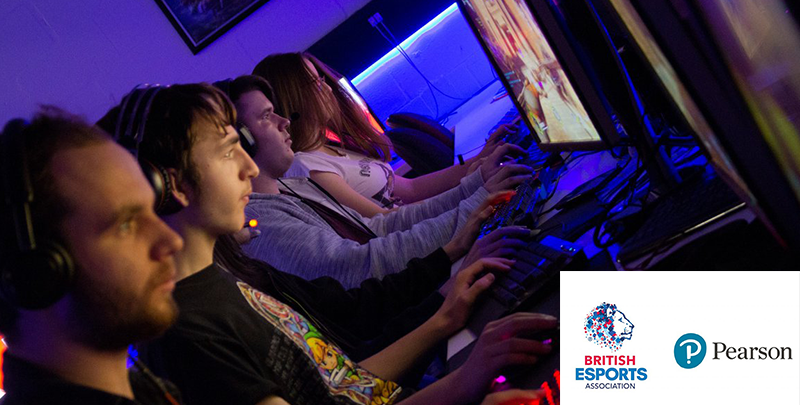 The billion-dollar market for competitive video gaming is continuing to rise, with new jobs requiring fresh talent. And it’s not just about playing – like sports, the sector requires those with transferable skills in marketing, sales, coaching, commentary, editing and lots more. To facilitate this, new esports BTECs from Pearson and the British Esports Association aim to foster the workforce of the future, writes Pearson and the British Esports Association.

The worlds of education and esports are colliding.

Over the past few years, UK universities and colleges have begun offering courses in the space to help people get the skills to land a job in the burgeoning field.

Esports is a hugely popular recreational activity that offers many job and career opportunities around the world. It’s different from standard video gaming in that esports is competitive, it’s human vs human and usually has an engaging spectator element to it, like traditional sports. Viewers typically tune in to watch matches live streamed on platforms like Twitch and YouTube, as opposed to standard television channels.

Esports tournaments see amateur or professional gamers compete against one another for a cash prize. There are more than 40 esports games, including 5v5 battle arena game League of Legends, 1v1 sports game FIFA, 4v4 shooter Call of Duty and more. Some tournaments have prize pools of more than $1m, with the biggest reaching $30m and beyond.

Overall, it’s estimated that the global esports market will generate revenues of more than $1bn in 2020, with almost 500m viewers around the world.

Like sports, esports requires a host of talent across a range of disciplines, from commentary to coaching, marketing to management, broadcasting, production, PR, journalism and everything in-between. These skills are transferable, leading to a wide network of career pathways crossing into other sectors, for example sports, broadcasting, cybersecurity and the wider digital sphere and beyond.

Pearson and the British Esports Association recognise and welcome this, and are leading the way in esports education to create pathways for young people seeking careers in esports and other closely linked digital industries.

In April 2020, the pair linked up to develop the first esports BTEC qualifications of their kind in the world. Institutions in the UK and around the world now have the opportunity to offer these new level 2 and 3 qualifications to students as of September 2020, with funding confirmed in the UK from the Education and Skills Funding Agency.

Aside from this, British Esports has been developing a wealth of esports careers advice, and Pearson has been producing useful content for students, teacher resources and others to educate them, including this piece busting common myths around esports.

The education sphere is also embracing esports’ competitive side as a recreational activity, too. More than 130 school, college and alternative provision teams take part in the British Esports Championships, a series of tournaments for students aged 12 and above. Matches usually take place in classrooms after school each Wednesday, but students are now also allowed to play from home in light of the covid-19 situation.

Teachers and students have reported a raft of benefits from the Championships, including increased attendance, behaviour and concentration levels. Other benefits of esports include the promotion of communication, leadership and social skills, greater reaction times, confidence, making new friends, having fun and more.

One such activity promoting the benefits of competitive gaming is World Esports Day. Taking place on October 24th, this will help increase awareness of the activity, with companies, teams, players and others getting involved with livestreams, gaming sessions, discussion panels and more, all whilst raising money for charity at the same time.

“The esports qualifications allow us as educators to continue to realise our vision for our learners, in order to transform lives, ensure learners have a great time, achieve their aims and progress onto their chosen destination in employment or Higher Education.”

For teachers and those in education who are looking for more information on how to get involved in esports, there’s the Esports in Education Summit, taking place online on November 10th, held by AoC Sport and British Esports and sponsored by Pearson. It’s free for teachers and leaders in education and registration is open now.