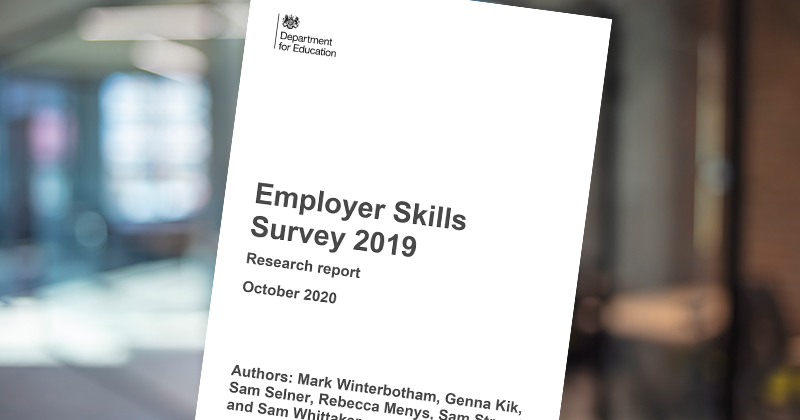 The proportion of staff being trained has dropped to its lowest level since 2011, according to the government’s latest employer skills survey.

More than 81,000 employers across England, Wales and Northern Ireland took part in the biennial survey for 2019 – the results for which have been published today by the Department for Education.

It states that the proportion of staff being trained in the last 12 months decreased, from 62 per cent in 2017 to 60 per cent in 2019; adding that this was the “lowest proportion reported since 2011” when 54 per cent was achieved.

The research report explains that this decrease was predominantly driven by a lower proportion of staff being trained in England (60 per cent vs 62 per cent in 2017).

Despite this, investment in training in England has risen but fallen overall mainly due to Wales.

The report states: “Employer expenditure on training and development over the previous 12 months was £42 billion. As well as such elements as fees to external providers and expenditure on equipment or materials, a substantial proportion of this expenditure covered the wages of staff while being trained, and of staff delivering training. Overall, employer investment was fairly evenly split between on- and off-the-job training (21.1 billion and 20.9 billion respectively).

The employer skills survey says the largest increase in total training expenditure occurred in the business services sector, from £9.4 billion in 2017 to £11.4 billion in 2019 (an increase of 21 per cent).

In contrast, there has been a continued downward trend in total training expenditure in the education sector; £3.5 billion was spent on training over the last 12 months in 2019, compared with £3.7 billion in 2017 and £4.2 billion in 2015.

Employers’ total investment in training over the previous 12 months was equivalent to around £2,540 per person trained and £1,530 per employee. “These figures have decreased by 1 per cent and 5 per cent respectively since 2017,” the report states, but adds: “However, across the employer skills survey series since 2011 the per employee and per trainee training spends have been relatively stable.”

Neil Bentley-Gockmann, the chief executive of WorldSkills UK, said these survey results underline the “urgent need for a high-quality skills pipeline which is adaptable to the rapidly shifting economic landscape”.

He added: “Employers have suggested that 63 per cent of skills-shortage vacancies were attributed to a lack of specialist skills or knowledge needed by candidates to perform their role.

“While we share the government’s commitment to skills and to Build Back Better, we must ensure this drive focuses on quality as well as quantity. By supporting high-quality apprenticeships and technical education we can shift the focus to excellence, not just competence, and provide young people and employers with the skills they need to succeed.”