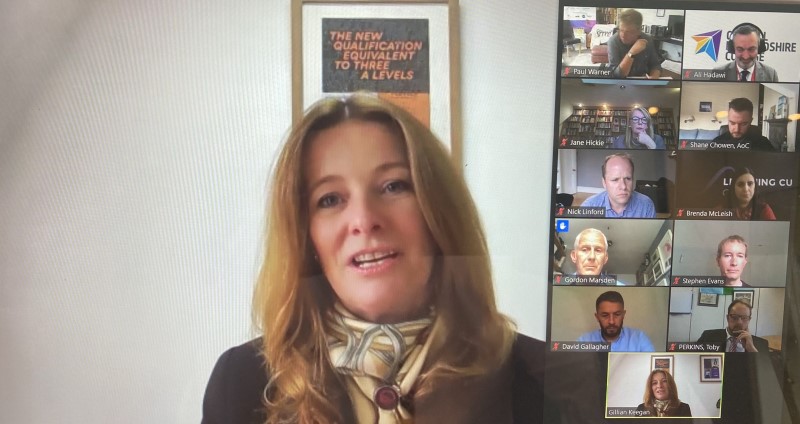 The skills minister has said she is “hopeful” the list of free, first, full level 3 qualifications being funded as part of the Lifetime Skills Guarantee will be published next month.

Speaking at an FE Week roundtable today, Gillian Keegan was asked when providers and learners can find out which courses they could start from next April with backing from the National Skills Fund.

“We’re hoping that we can give you some more information in the next couple of months, and hopefully by November, so that’s what we’re kind of working to,” she said.

This comes after prime minister Boris Johnson announced in September the government would expand on its current offering of a first, full level 3 qualification for learners up to the age of 23, so adults of any age could take advantage of the offer.

The Department for Education said at the time: “We will set out details of courses next month [October].”

The ESFA’s online “list of qualifications approved for funding”, which can be downloaded from gov.uk, contains 13,628 qualifications, FE Week analysis previously found.

More than 4,300 of those are at level 3, and 1,249 of that group are eligible for the legal entitlement, making them already fully-fundable for 19- to 23-year-olds via the adult education budget.

Keegan told the roundtable the qualifications have to be high-quality, have the respect of business, and address a “wide range” of labour shortages.

“So if you are working on something which every year has loads of people going off into great jobs because the businesses in that sector really, really value that qualification, those are the kind of ones that we will be focusing on, presuming they are in areas we have labour shortages,” she said.

“So there will be a wide range of courses that cover [labour market] shortages.”

Education secretary Gavin Williamson caused confusion last week after suggesting to the House of Commons that T Levels will be included in the qualifications list – even though the DfE lists T Levels as just for 16 to 19-year-olds.

The DfE later clarified that Williamson only meant that T Levels could possibly be made available to adults in the future, not by April.

View the full roundtable session below.