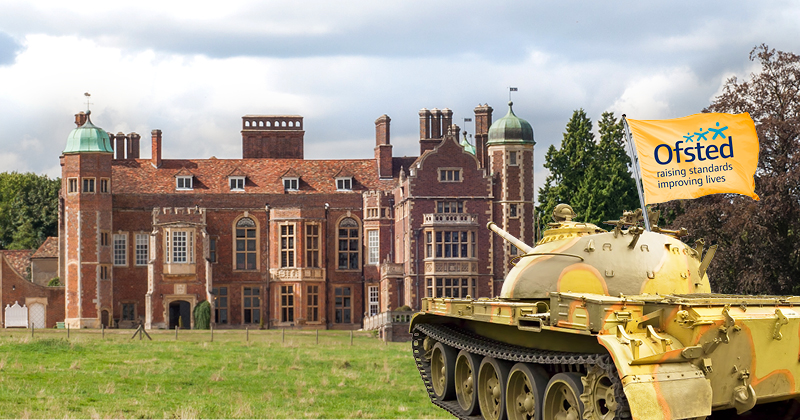 Ofsted will soon be handed powers to inspect all universities that offer apprenticeships – including the likes of Cambridge, FE Week can reveal.

In a controversial move, the education watchdog is set to take on responsibility for overseeing all apprenticeships, including those at the degree levels of 6 and 7, for the first time.

Only the Office for Students can police higher apprenticeships under current policy, while Ofsted’s remit goes up to level 5 – a position that has frustrated the inspectorate for many years.

Plans have been drawn up to strip the OfS of this role amid concerns the higher education regulator is not up to the job. It is understood that the switch to Ofsted will be announced imminently.

A spokesperson for the Department for Education said they are working “closely with the Office for Students and Ofsted to consider carefully what the most appropriate quality assurance arrangements should be for level 6 and 7 apprenticeships” and will “provide further updates in due course”.

The Russell Group, which represents the 24 “leading” universities in the UK including Cambridge, did not pour cold water over the plan for Ofsted to inspect their members.

But a spokesperson said the group will continue to work with government on delivery and expansion of the apprenticeship route, including how to avoid “overburdensome or disproportionate regulation”.

The University Vocational Awards Council, which also represents a number of universities, has previously voiced its opposition to such a move and questioned Ofsted’s expertise to inspect degree-level fields such as registered nurses, social workers and architects.

FE Week analysis of the latest DfE data, which covers the first three quarters of the 2019/20 academic year, shows there were 231 providers offering level 6 and 7 apprenticeships – with over 26,000 starts between them.

Of those 231 providers, 47 (20 per cent) are currently completely out of Ofsted’s scope of inspection as they deliver no provision at level 5 or below.

The most well-known redbrick university that delivers higher apprenticeships but has been out of scope for Ofsted visits to date is the University of Cambridge.

Cambridge currently delivers two level 7 apprenticeships that have a combined cohort of 120 apprentices: applied criminology and police management, which commenced in 2019; and architecture, which launched this month.

A University of Cambridge spokesperson said they would “welcome scrutiny from relevant bodies” and should Ofsted begin to oversee all levels of apprenticeship provision, “we will necessarily adjust to meet the requirements in the best interests of our student apprentices and their employers”.

Oversight of degree apprenticeships has sat with the OfS since their launch, but monitoring of the provision is not official inspections of the type Ofsted conducts.

A decision was made in June 2019 for the higher education regulator to oversee all level 6 and 7 apprenticeships, including those without a prescribed HE qualification delivered at providers not on the OfS’ register, which had gone years without any oversight.

This was against the recommendation of the post-18 education review conducted by Philip Augar, who had called for Ofsted to inspect all apprenticeships.

Frustration has been building over the pace of the OfS’ work in this area. The regulator has so far only completed “pilot reviews” to a small number of providers not on its register of HE providers in late 2019 and concluded an evaluation of the pilot before lockdown hit.

OfS previously said they would publish these reports, but has now gone back on that promise. A spokesperson explained that they have paused their oversight of level 6 and 7 apprenticeships until HE providers are able to return to “a more normal operating environment”, as is the case for its other regulatory activity.

Being handed oversight of all apprenticeships will mark a big win for Ofsted, which has been clamouring for the job for over four years.

Chief inspector Amanda Spielman has voiced concerns multiple times that some universities and training providers are getting away with offering level 6 and 7 apprenticeships which are simply “repackaged graduate schemes”.

In an interview with FE Week in March 2019, Spielman said the first FE inspection she observed found a large accountancy firm had “very clearly” turned its tax graduate trainees into level 4 and 7 apprentices.

But because the inspectorate’s remit only extends to level 5, Ofsted could only inspect the level 4 provision, while in another room level 7 apprentices were not being reviewed.

Last week, Ofsted’s deputy director for FE, Paul Joyce, said he would welcome the power to inspect all apprenticeships and it is something “that I think we could do, absolutely”.

PICTURE: Madingley Hall, built in 1543 by Sir John Hynde, part of Cambridge University and home to the Institute of Continuing Education where apprenticeships are delivered