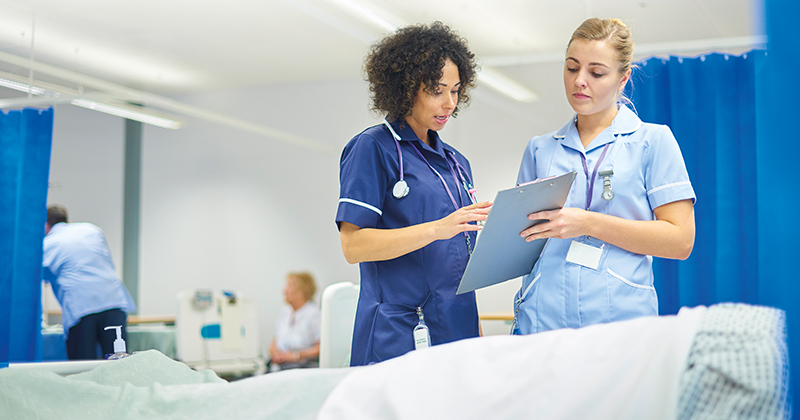 New employer hubs to “turbocharge greater college collaboration” with the NHS have been proposed to fill “significant workforce vacancies” in health and social care. They would be funded by £5 million of government money.

The recommendation was made in a report published today by the NHS Confederation membership body and the Independent Commission on the College of the Future to help tackle the 90,000 and 120,000 vacancies in the NHS and social care sector respectively.

Amanda Melton, a commission member and principal of Nelson and Colne College in Lancashire, said the Creating the Workforce of the Future report was “an opportunity to unlock colleges’ potential to develop strong and sustainable pathways into NHS careers for local people using tangible steps”.

The report also recommends that colleges set up a health and care college council to “raise the voice and influence of colleges across Whitehall and throughout the country”.

The seven government-funded hubs proposed by the report would be based in England’s seven NHS regions. They would “develop a coherent and navigable interface for NHS organisations”.

Colleges with large health and social care provision would host the hubs, which would feature a dedicated team coordinating an NHS workforce strategy between the health service, colleges and other education providers.

They would also develop clear pathways and progression routes, and consider ways for schools, colleges and universities to work together on public health strategies for their area.

Association of Colleges chief executive David Hughes said a relationship between the NHS and colleges in communities “will not only support the efforts for a speedy economic recovery, but also give those people in every community access to vital jobs and training in the health and social sector”.

It would work with NHS Employers, a representative body for NHS trusts, to produce a compendium of good practice which recognises “the value of the colleges in sustaining the future of the NHS”.

Danny Mortimer, deputy chief executive of the NHS Confederation, said government commitments to “levelling up” the country and solving the health and social care workforce crisis would “fall flat without targeted action to improve supply, including investment in colleges to support upskilling, retraining and recruitment into these vital roles”.

Today’s report follows a roundtable held in November 2019 between NHS trusts in the confederation and colleges.

Health Education England (HEE), which has a sole purpose of developing the health sector’s workforce, was not at the roundtable nor did it feature as a supporter in the report. However, the Independent Commission on the College of the Future said HEE had been involved in discussions about the report and its recommendations. HEE did not provide a comment at the time of going to press.

A government spokesperson welcomed the recommendations and said the report would be taken “into consideration”.

They added that the government would soon “set out plans to build a high-quality further education system that will unlock student’s potential and ensure our colleges continue to meet the needs of their local communities”.