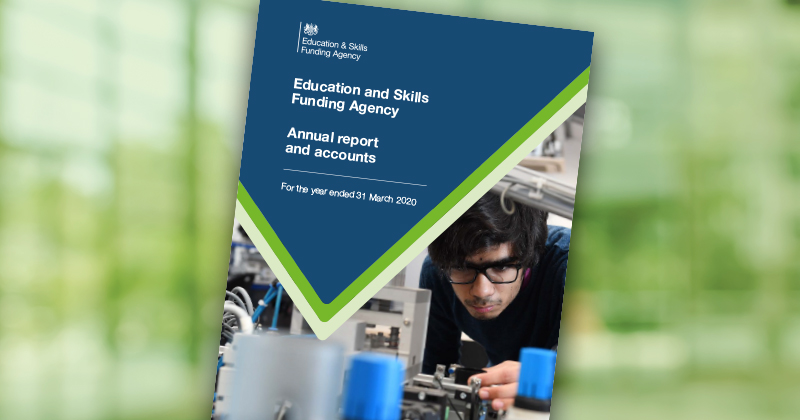 FE Week has the main findings:

During the last financial year, South Thames College received an ESFA capital grant to “facilitate the acquisition of the site for a new school”.

The ESFA’s accounts state: “In certain circumstances over-payments of grants can occur when grant payment profiles for educational bodies are based on expected learner numbers which are not supported by actual numbers or where capital grants are eligible for recovery.

“One example relates to our waiver of the capital grant recovery from South Thames College to facilitate the acquisition of the site for a new school.”

Other waivers of overpayments include £823,000 for Manchester Creative Studio and £609,000 for Wigan UTC.

Across all education streams in 2019-20, the ESFA reported claims waived or abandoned of £25 million for this year compared to £62 million the year before.

The agency said this has reduced due to the completion of the college restructuring programme which implemented recommendations from the area reviews of post-16 colleges.

The only FE sector loan to be waived in 2019-20 was £1,750,000 for Trafford College, which was handed exceptional financial support for its merger with Stockport College. Trafford is also currently working on plans to merge with the troubled Cheadle and Marple Sixth Form College, but this process was delayed earlier in the year owing to Covid-19.

The ESFA said it “strengthened our oversight and assurance activities”, increasing the amount of resource dedicated to ensuring the “proper” use of public funds and engaging more with the sector.

As part of this, the agency delivered 115 compliance reviews on independent training providers (ITPs) with 21 additional control visits.

4. …but fraud continues to be a problem

Fraud hit the agency for £5.6 million in 2019-20, which mainly relates to two unnamed “specific cases” that are not yet in the public domain.

Recovery of the identified losses “remain ongoing”. During the year the ESFA was able to recover £8,119.

The ESFA said the formation of new academy trusts and mergers continued to rise in 2019-20 with academies increasing by around 900 in-year.

Whilst there has not been a “significant” rise in the number of academy investigation visits compared to 2018-19, there is a “continuing slightly upward trend aligned to sector growth”.

Additionally, in response to changes in apprenticeships funding “we have seen a rise in the number of allegations this year”.

Last year the ESFA launched a refreshed and “strengthened” Register of Apprenticeship Training Providers (RoATP) through stronger criteria added to the application process and complete re-registration of providers.

There are now 2,067 providers on the register, and during the process the agency removed 894 providers who did not meet the new criteria.

6. Overall underspend mainly because of apprenticeships

The ESFA’s total outturn was £58.57 billion against a budget of £58.83 billion, a 0.4 per cent underspend. This included £58.51 billion expenditure on “grant and other funding, the balance of expenditure was in respect of staff costs and operating expenditure”.

The agency said the variance on resource funding was largely attributable to an underspend on apprenticeships.

As revealed by FE Week earlier this month, the Treasury took back £330 million of unspent apprenticeships funding last year.

An investigation was launched in January after betting companies were “wrongly provided access” to an education database containing the information of 28 million children.

This was the only “protected personal data related incident” for the ESFA that was judged significant enough to be formally reported to the Information Commissioner’s Office during 2019-20.

The ICO was notified that a learning provider, Trustopia, registered with the Learning Records Service (LRS), had been working with another company to use their access to the database for the purposes of ID verification for “non-educational purposes, in clear breach of their agreement with DfE”.

The personal data comprised of the name, date of birth, gender and postcode of 380,000 individuals registered with the LRS.

The ESFA’s accounts state that the ICO is continuing its investigation and will “contact the Department for Education once the investigation is concluded”.

The accounts say the pay boosts for both civil servants were made after they took on “additional responsibilities in 2018-19 which were reflected in their salary in 2019-20 and included an element of back pay”.

9. £1.4m paid to firms linked to ESFA board members

The accounts show £964,000 was paid to Hays Travel, a company owned by family members of ESFA chair Irena Lucas. She is also the chair at Hays, one of the UK’s largest independent travel agents.

Meanwhile, another £684,000 was paid to Voyage Care, were ESFA board member Stuart McMinnies is a non-executive director. The firm provides support for people who have complex needs.