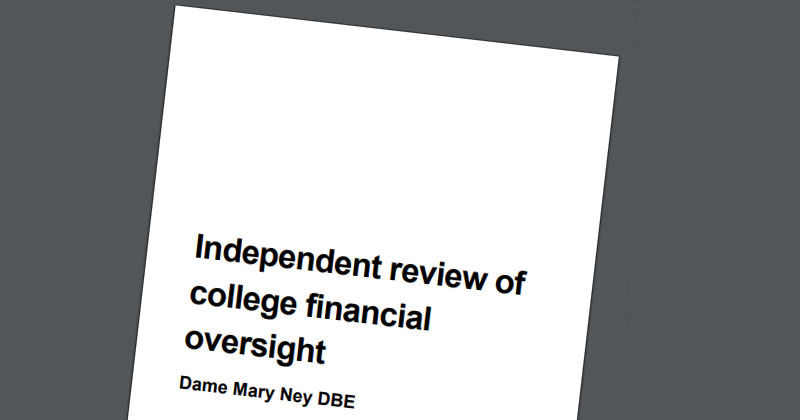 Staff cuts to the Education and Skills Funding Agency have been a key factor in their failure to spot early signs of college weaknesses, the long-awaited independent report into oversight of college finances has found.

Dame Mary Ney was commissioned by former skills minister Anne Milton in August 2019 to conduct a review after the shock collapse of the Hadlow College Group revealed failings by the funding body to spot warning signs.

The overarching recommendation from her review, published this morning but dated October 2019, is that there needs to be a “new strategic relationship with the sector”.

It states that the nature of the current intervention regime, the “lack of a sector-wide strategy” and the capacity and resources of the ESFA have resulted in a relationship between government and the sector which is “largely focused on financial failure and which inhibits colleges being transparent with government”.

The relationship is “largely contractual”, focused on the funding agreements and therefore government “does not have sufficient line of sight on the wider issues colleges face and early warning signs of difficulty”.

As a consequence, the sector “lacks confidence in seeking support and advice at an early stage”, Ney warns.

She appears to be recommending the return of funding body relationship managers that would frequently meet with all college leaders, which were a feature of the previous Learning and Skills Council.

The report states that whilst each college currently has a named liaison worker from the ESFA Territorial Teams, “in practice capacity only allows this to be a desk-based oversight of college data which in the main relates to financial returns” and this only becomes a more active role for colleges which are on the intervention pathway.

“This means that in the main the ESFA Territorial Teams do not have a relationship with colleges which gives them any regular granularity of understanding of such matters as vision and ambition, leadership strengths and weaknesses, resource planning, governance compliance etc,” Ney said.

“Importantly it does not give them a line of sight to early signs of potential weaknesses nor allow the government to hold colleges to account for compliance with its guidance and expectations.”

Ney said that for colleges not in intervention, the extent of compliance with the governance and financial planning guides is “largely unknown”.

“Generally, there is no line of sight of the functioning of boards and audit committees; there is not an in depth assessment of the quality of management accounts and financial planning; there is no scrutiny of governance or counter fraud policies; and there is no discussion around curriculum planning, trading/commercial activity, estate management, risk management, partnership working and whether the college is supporting the needs of local employers or the economy,” she added.

But Ney acknowledges that there has been a 60 per cent reduction in ESFA capacity for this work which has led to “prioritisation of resources to focus on the most problematic cases”.

As revealed by FE Week in January, the then Skills Funding Agency shed over 1,000 staff when responsible for college financial oversight, before being brought into the Department for Education (DfE) in 2017.

Ney said the development of a “more proactive relationship with all colleges individually would give oversight of all of these issues and allow a stronger culture of prevention to be developed”.

“It would give colleges the confidence to seek timely advice and help, leading to fewer colleges in intervention and fewer demands for financial support.”

This “new relationship” could incorporate “annual conversations, looking holistically at the college as a critical friend but also allowing the college to showcase their achievements and raise their concerns”.

It would require ESFA staff to become “active participants in nurturing college development”.

Ney also appears to be in favour of giving government greater control. Her report states that the power to be “more decisive could lead to shorter periods in intervention for colleges in difficulty who need a structural solution”.

“A new regulatory regime would require an appetite for radical legislative change and therefore is a matter for more long term consideration,” she added.

The review also recommends that those involved in financial oversight contribute to the Ofsted judgement on leadership to “provide an holistic view and avoid disconnect between the judgements of the two bodies”.