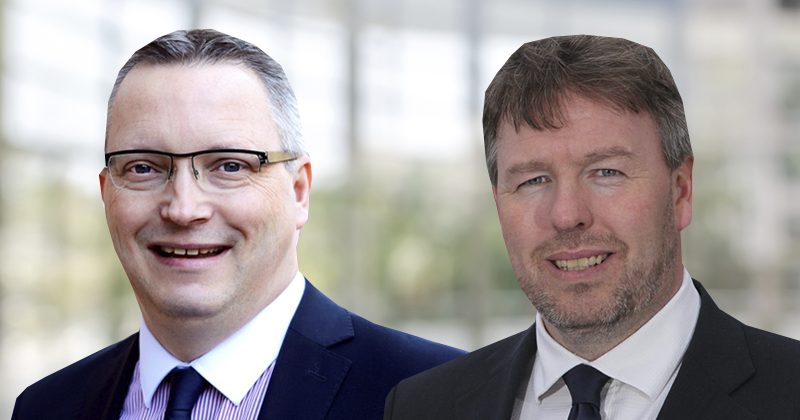 Paul Eeles and Terry Fennell, the chair and vice-chair of the Federation of Awarding Bodies respectively, are to step down from the positions at the end of the year.

The pair have each served two terms – seven years – on the board and will officially leave the membership organisation at their next annual general meeting in December.

A statement from the FAB board said they will put in place a succession plan over the summer and a further announcement will be made in the autumn.

Eeles (pictured above left), who is also the chief executive of the Skills and Education Group, joined FAB as a board member in 2013 and became chair in 2016.

He said it has been an “honour and a privilege to serve on the FAB board for over seven years and to have been its chair for just over four years”.

“When I was elected chair my overriding goal was to ensure FAB was sat around the right tables with agencies and government on behalf of its members, representing the collective voice of the awarding sector on the issues which impact directly on members and the learners and stakeholders they serve,” he continued.

“Together as a board, staff and membership we have achieved that. I am proud of our achievements. This now feels the right time with a strong staff and board to step down.”

Fennell (pictured above right), the chief executive of awarding body FDQ Ltd, also joined the FAB board seven years ago and was elected vice-chair in 2016.

“I have really enjoyed serving as vice chair at FAB and I have learnt so much from the various apprenticeship and technical interest groups that I was fortunate to oversee these past few years,” he said.

“It has also been a pleasure supporting Paul as chair and you could not find a more committed and passionate advocate to represent the interests of the awarding sector. I wish Tom, the hardworking federation team, the board and indeed all FAB members the very best in the future”

Tom Bewick, chief executive of FAB, said: “On behalf of the whole staff team, past and present, I would like to say how fortunate the organisation has been to have been led and supported at board level by Paul and Terry, who both care so much about the future of UK awarding, apprenticeships and assessment.

“When I came into post just over two years ago, they communicated a very clear vision of where FAB needed to develop. It is a great credit to them both and their leadership skills that they retire from the board having created a far more innovative and influential industry body.”