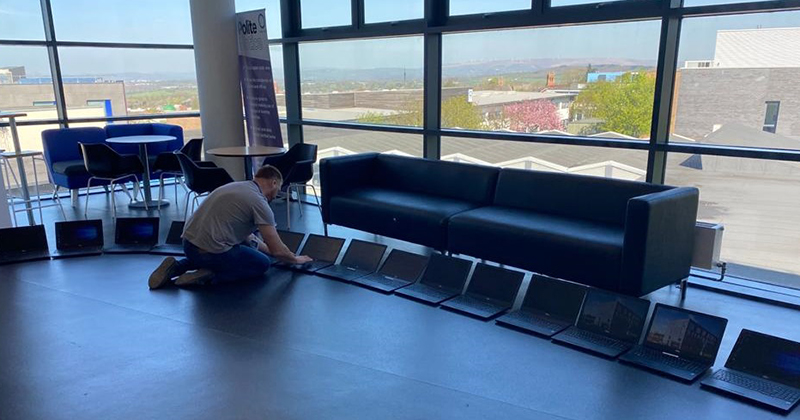 A college’s IT services team have been hailed “unlikely heroes” in the face of Covid-19 after rapidly connecting more than 6,000 staff and students when the outbreak hit.

Lee Murphy, IT services manager at Oldham College, said he always had a plan for “disaster recovery” scenarios but never expected to have to put it into practice.

In total, his team of seven either had to buy, source, build, prepare, install, test, protect and deliver more than 300 separate pieces of kit in a matter of days.

With no Oldham College staff on site to take deliveries, every single one of the purchases had to be sent directly to Murphy’s home in Rochdale.

“My house has been like an Amazon depot,” he said. “My neighbours just keep seeing huge IT-delivery trucks coming and going from my house at all hours. They must think I’m running some incredibly dodgy racket from home – I might have to move!”

Staff rounded up around 100 laptops that students had been able to borrow and recommissioned them all with “standalone” access to systems.

A planned purchase of 145 Chromebooks was brought forward, and 40 new mobile phones were also sourced so administrators and programme leads could regularly contact learners.

Some students, including those studying English as a second language, had no kit, so workbooks had to be printed and hand-distributed to their home.

Some employees had no home broadband, so each had to be sorted with access to a mobile network.

One staff member has been visiting campus each day to check that all the central infrastructure is functioning as it should. The rest of the team have been monitoring user activity, identifying issues and logjams and dealing with enquiries: more than 500 phone calls, 50 emails and 25 IT service requests have been received.

Principal Alun Francis said “a huge debt of gratitude” was owed to Murphy and the IT services team for their “incredible” work during this period. “They are always positive, full of solutions and never shirk a challenge.

“To be honest, we would have failed without them in the last few weeks. They have been truly astonishing every day.”