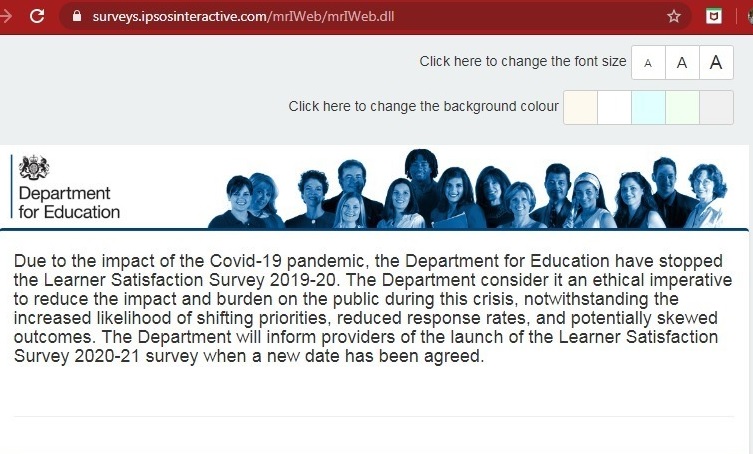 The annual FE learner satisfaction survey has been axed for 2019/20 due to the Covid-19 outbreak.

The decision was taken by the Department for Education mid-survey – as providers began gathering views (predominantly via an online survey) from 9 March and had until 26 June.

“As the demand increases for statistics and data to measure the impact of the COVID-19 pandemic, the Department for Education has had to change its data gathering and release practices, focussing efforts on priority analysis and statistics,” it said in a statement about their FE Choices learner satisfaction survey.

“The department considers it an ethical imperative to reduce the impact and burden on the public during this crisis, notwithstanding the increased likelihood of shifting priorities, reduced response rates, and potentially skewed outcomes.”

The announcement comes after the annual employer satisfaction survey was also cancelled – a decision which was taken in December.

There was no reason given for scrapping the employer survey. The DfE only said that FE providers who provide apprenticeships should “encourage their employer partners to complete the real time ‘provide feedback’ when they receive an invite from the apprenticeship service”.

The DfE said that it will inform providers of the launch of the learner satisfaction survey for 2020/21 “when a new date has been agreed”.