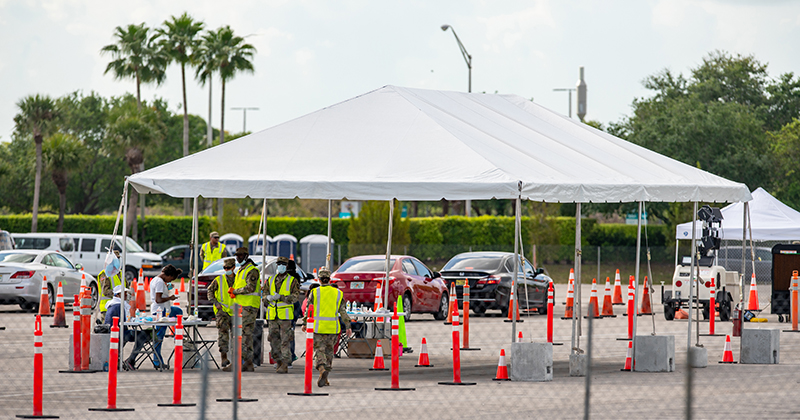 College car parks are being transformed into coronavirus testing centres for NHS and care sector workers.

Hopwood Hall College, based in Rochdale, and Preston’s College are among the first to offer up their facilities for the service while they’re closed to the majority of students.

Another, Central Bedfordshire College, has agreed to have two of its car parks used for the same purpose, while London South East Colleges has offered one of theirs to the London Ambulance Brigade.

Hopwood Hall College launched its car park testing centre, built with portacabins and marquee-style tents, on Tuesday after being approached by the Northern Care Alliance NHS Group on 8 April. It is set up to conduct around 40 tests per day, strictly for NHS and health and social care staff.

The service can only be used on an appointment basis.

Principal Julia Heap said: “We are extremely proud to be able to support our NHS colleagues in enabling this to happen so swiftly.”

A college spokesperson added that their students “remain our priority” and they will “continue to assess the situation working with our NHS colleagues”, but they were not able to say how long the temporary testing centre will run for.

Meanwhile, tents were set up at Preston’s College’s main campus on St Vincent’s road on Wednesday.

The “drive-in” facility, operated independently of the college, will initially provide testing for NHS frontline staff and other critical key workers in the form of self-administered and administered tests.

Principal Lis Smith said: “We are extremely proud to provide the additional use of one of our car parks as a testing centre at this crucial time.

“When our staff and learners temporarily moved to home and online working, we decided to offer whatever help we could to the NHS and key workers, providing full access to parking spaces for local hospital staff and visitors.”

John Newton, national coordinator for the UK Coronavirus Testing Strategy, said: “New testing sites such as this one [Preston’s] are critical in supporting NHS staff who are isolating at home to return safely to work if the test is negative.”

Central Bedfordshire College’s principal, Ali Hadawi, told FE Week that his college had agreed three weeks ago for two of its car parks to be converted into testing centres for NHS staff, but they are still waiting to hear back about when it will go ahead.

It is not just testing centres that college car parks are being used for during the Covid-19 pandemic.

Sam Parrett, principal of London South East Colleges, said that her group is currently supporting the London Ambulance Service by commissioning its Bromley campus car park to be used for both NHS and military ambulances.

The vehicles are being used to support the extra fleet capacity that is being required during the Covid-19 pandemic.

She told FE Week that there are between 40 and 80 vehicles currently stationed at the college and “we have issued them all with 24/7 access passes”.

“We are delighted to be able to support frontline services in this small but important way,” Parrett added.