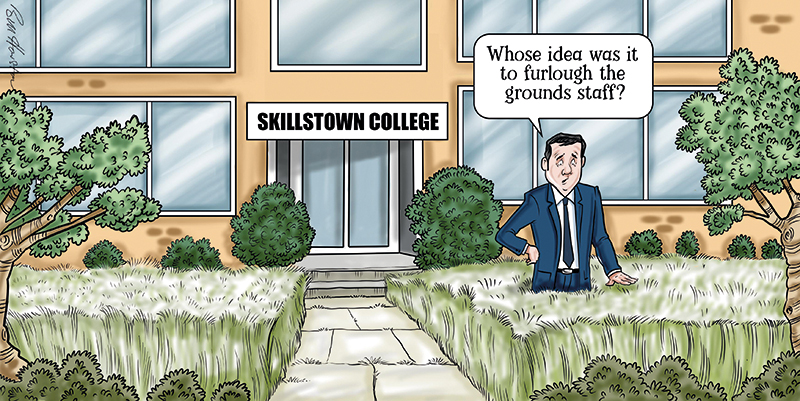 Treasury officials have given colleges the green light to tap into their coronavirus job retention scheme.

Speaking to FE Week, a spokesperson said staff who work in areas of a college that are not primarily funded by the government and who cannot be redeployed would be eligible for the scheme.

The news will come as a huge relief to college leaders, more than twenty of whom have shared with this newspaper their plans to furlough dozens, potentially hundreds, of staff.

Responding to an FE Week survey sent to senior college leaders, one said they have a proposal being presented to governors to furlough as many as 185 workers from departments across the college including “apprenticeships, nursery, estates, commercial services, health & safety, finance, HR, student services and marketing”.

The finance director at a college in the East Midlands, who did not wish to be named, said the level of savings was still to be calculated but “without the government subsidising wages there would be large financial deficit, breach of banking covenants and redundancies”.

And a vice principal at a college in the south west said they plan to start with furloughing 50 staff “in the very short term, but could extend to up to 300 staff” to save “potentially £100,000 in the first instance”.

The coronavirus job retention scheme is a temporary scheme which will last at least three months starting from 1 March 2020.

The Treasury, due to have the scheme up and running by the end of this month, says “employers can use a portal to claim for 80 per cent of furloughed employees’ usual monthly wage costs, up to £2,500 a month, plus the associated Employer National Insurance contributions and minimum automatic enrolment employer pension contributions on that wage”.

But speaking to FE Week, a leading lawyer has urged caution, stressing “the guidance makes it clear that the government does not anticipate significant claims from publicly funded institutions”.

Ben Wood, partner at the law firm Eversheds Sutherland, said: “The criteria that HMRC will apply to applications from colleges for furlough payments are not yet known and there are potentially serious reputational risks if a publicly funded entity is perceived to be unfairly taking advantage of a taxpayer funded scheme.

“Having said that, in the face of depleting budget income there are obligations on governors and college leaders to look seriously at any potentially available mitigation.”

Responses to the FE Week survey show many principals have already informed their college board of their furloughing decisions whilst others have sought approval.

David Hughes, chief executive of the Association of Colleges said: “College finances are on a knife-edge and many quick decisions are required by college leaders and their governing bodies. This decision is something that the principal would usually make under normal delegations.

“Because of the exceptional circumstances many leaders might engage their governing body if they can before making the decision.

“College governing bodies hold their principals to account for the effective operation of their college, including educational, financial and staff performance. 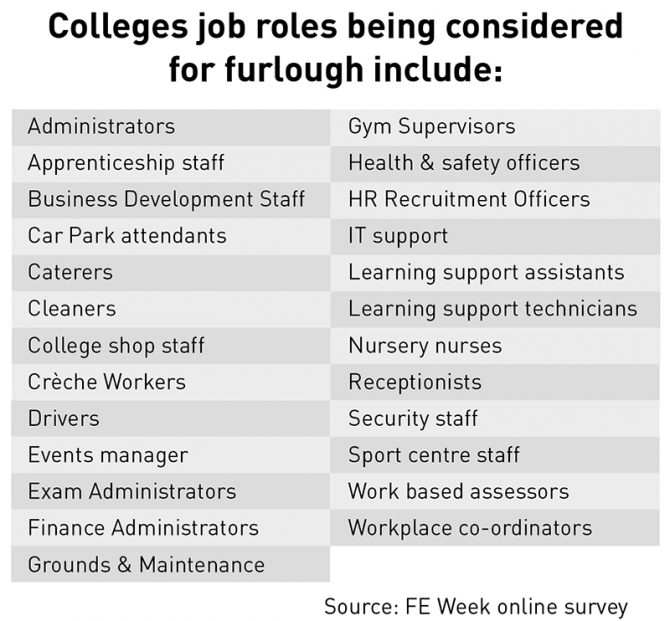 Just one of the 22 colleges that responded to the FE Week survey said they definitely did not plan to top up the 80 per cent government wage subsidy to 100 per cent for furloughed staff.

“What message would it send to those still being asked to work? Most people’s costs have reduced as result of not travelling, lower mortgage rates etc so net difference should be marginal and manageable,” the deputy chief executive of the college said.

The principal at a small college in the North East said they planned to furlough nearly 25 per cent of all staff, 36 out of 155, mainly direct apprenticeship delivery staff and administrative support.

But a spokesperson for the Department for Education stressed that it was not only Treasury guidance on the Covid-19 staff retention scheme that needed to be followed.

Colleges must, they said, have sufficient staffing resource in place to ensure vulnerable learners and the children of key workers are supported.

Advice from Ben Wood, a leading lawyer to colleges

“The starting point is that the job retention scheme guidance does not absolutely preclude colleges from applying but they should approach any applications with caution.

The guidance makes it clear that the government does not anticipate significant claims from publicly funded institutions.

Further, the criteria that HMRC will apply to applications from colleges for furlough payments are not yet known and there are potentially serious reputational risks if a publicly funded entity is perceived to be unfairly taking advantage of a taxpayer funded scheme.

Having said that, in the face of depleting budget income there are obligations on governors and college leaders to look seriously at any potentially available mitigation.

The areas where colleges might have some prospect of accessing the job retention scheme are likely to be connected with lost apprenticeship and trading income where activities have ceased as a result of CV19.

I would suggest that if an application is going to be attempted there should be an audit trail that identifies: lost income streams as a result of CV19; individual roles that can legitimately be said to have ceased for CV19 reasons and which cannot properly be said to be publicly funded; an understanding of the letter and the spirit of the job retention scheme and its guidance – and that those principles have been carefully taken into account in putting the application together.

“I would recommend that colleges take a minimalist approach to accessing the scheme and have a plan B in case an application is not accepted by HMRC.”