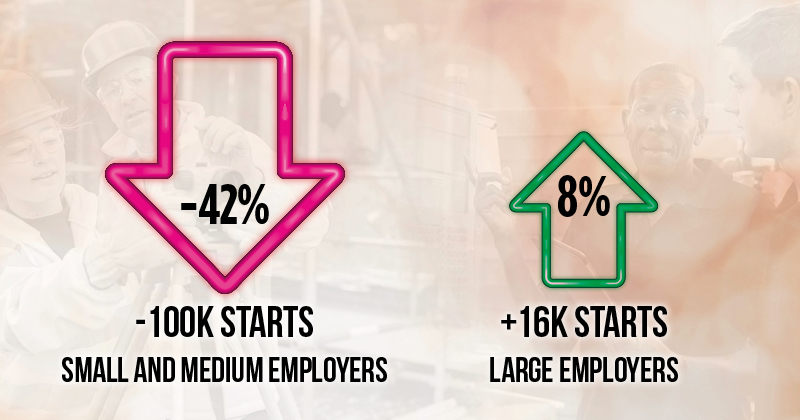 The Department for Education has revealed for the first time how the introduction of the apprenticeship levy in 2017 has led to a huge shift away from small employers.

Apprenticeship starts with small and medium-sized enterprises (SMEs) have fallen 40 per cent, while starts with large employers rose eight per cent.

One of the most affected industries, according to the figures, is health and social work.

Starts at SMEs in the “wholesale and retail trade” and “manufacturing” industry both fell around 40 per cent over the two-year period.

The findings were revealed in the DfE’s analysis which “looked at the impact of the introduction of the apprenticeship levy on employers engaging with apprenticeships”.

Mark Dawe, the chief executive of the Association of Employment and Learning Providers, told FE Week: “This analysis is very timely with IfATE launching its consultation on funding bands because while the limited availability of non-levy funding is undoubtedly a major factor, the unviable funding rates for certain standards in, for example, hospitality and adult social care go a long way towards explaining these shocking falls.”

“Neither a flatlining economy nor stuttering social mobility are going to change for the better unless both factors are properly addressed.”

The DfE’s analysis will be of particular interest to the education select committee, which held their first oral evidence session this parliament this week on the impact of, and possible reforms to, the policy.

Stephen Radley, director of strategy and policy of the Construction Industry Training Board, told the committee it had been “very challenging for the construction industry, although the experience has been very varied”.

The latest figures show apprenticeship starts at firms in the construction industry have fallen 23 per cent, from 25,230 to 19,360 at SMEs.

In January, new boss of IfATE, Jennifer Coupland, called for an additional £750 million to prop up small business apprenticeships.

The Treasury poured cold water on hopes for new funding, after it confirmed that yesterday’s budget offers no extra cash for the programmes.

But the AELP has since claimed that new skills minister Gillian Keegan has pledged “significant funding” for additional small business apprenticeships in the “coming year” following a private meeting.

The DfE’s analysis showed that public administration was the only sector to experience a rise in the number of apprenticeship starts at SMEs, although this was recorded at just two per cent – from just 630 in 2016-17, to 640 in 2018-19.

However, almost all of public administration apprenticeships (98 per cent) took place within large employers in the last year, which saw starts rise 23 per cent after the introduction of the levy, from 22,180 to 27,190.

It was also one of only four industries to see an overall growth in starts over this period.

New legislation from 2017 set public sector bodies with 250 or more staff a target to employ an average of at least 2.3 per cent of their staff as new apprentice starts over the period of April 2017 (when the levy was introduced) to March 2021.

The other sectors bucking the trend last year were information and communication (28 per cent), mining and quarrying (22 per cent), and professional and scientific programmes (nine per cent).

A Department for Education spokesperson said: “We are continuing to work with all employers including small and medium businesses to make sure more people get the skills they need to get ahead and employers have the skilled workforce they need to grow.”