Funding rates for some apprenticeship standards could be cut by almost half under new proposals being put forward by the Institute for Apprenticeships and Technical Education.

A consultation on plans for a “more transparent” system for setting apprenticeship funding rates for standards, based on “independent evidence”, was launched today.

But the institute also published an impact assessment detailing how significant rate reductions could result and made it clear the new method “strengthens value for money, by supporting employers to pay the appropriate costs for training and enabling more employers to access funding”.

Officials have proposed three models: ‘core’ method which includes five categories (see below), core with sector subject weighting, and core with employer input. The values used in the models are based work undertaken by the IFF Research, a research agency, on behalf of the IfATE.

The impact assessment was carried out to test each model on nine existing standards last year.

FE Week analysis shows that eight of the nine standards would see their funding rate drop under all three of the proposed models.

Rates dropped by an average of 30 per cent using the ‘core’ method.

And when the core with subject weighting, or the core with employer input models were applied, the average rate across the 9 standards fell by 18 per cent and 2 per cent respectively.

For three of the tested standards, their funding rates dropped by more than 40 per cent using the ‘core’ model.

“If this were representative of the final outcome, the implications for high quality delivery could be bad. Therefore AELP will be studying this very closely.” 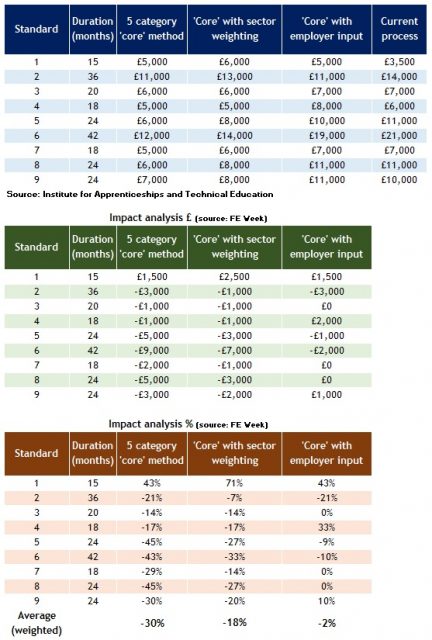 The institute has said that there is “no intention” to reset current funding bands using the final new model in the short-term.

It would be for use on “wholly new or fundamentally changed apprenticeship standards rather than to review the existing stock of standards”. But where a request for a standard to be reviewed or revised is submitted, “we anticipate that a variation of the model would be used”.

A spokesperson for the Institute for Apprenticeships and Technical Education (IfATE) said: “The purpose of this consultation is to make sure funding recommendations are evidence-based and transparent.

“We want the decision making process to be clearer to employers, providers, awarding organisations and everyone else involved with delivering apprenticeships.

“It is a positive step to help address previous concerns about funding band decisions and we welcome as much constructive input as possible.”

The sector has until 6 April to respond to the consultation.

The IFF’s research found that eligible costs of apprenticeship training and assessment could be divided into five categories: teaching, consumables, formative assessment, end-point assessment (EPA), and administration (and eligible overheads).

The institute’s proposed approach is to “set a value for each of these five categories” and the maximum funding band would be “the sum of the five values” (see table). 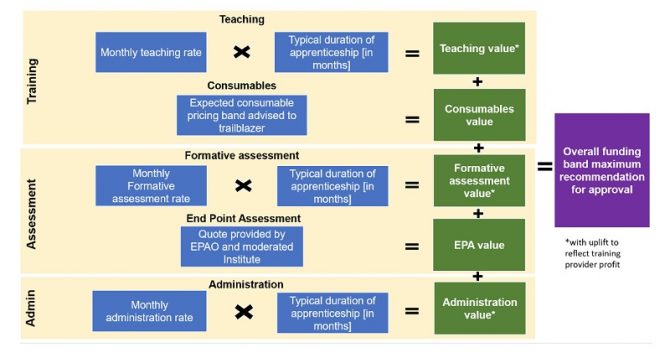 The pricing of consumables would range from £100 to £400 and be advised by individual trailblazer groups for each standard, while EPA would be based on a quote provided by the end-point assessment organisation.

For teaching, formative assessment and administration, the IFF research suggested that these costs tend to increase as duration increases. So, the values for these three categories will be generated by multiplying a monthly rate by the planned duration (in months) of the apprenticeship.

The costs for these three categories have been set at £130 per month for teaching, £30 for formative assessment, and £30 for administration.

Where an apprenticeship requires the achievement of one or more mandatory qualifications, the IfATE has said £300 can be added (only once per apprenticeship) to the formative assessment value.

The institute says this “predictable and simple” core model would enable it to make transparent recommendations in a consistent way and achieve greater value for money.

However, officials noted that in some cases there may be other factors which lead to differences in costs and the core model “might not be able to capture those differences”.

To address this, it has set out set out a further two options “for capturing differences in delivery costs for different types of apprenticeship”.

For this option, Sector Subject Area (SSA) in ‘programme cost weightings’ (PCW) would be applied to teaching costs, as this category had the “greatest variation” between standards in the IFF’s research.

This weighting is already used for publicly funded adult education and is also used provide uplifts for subjects identified by the Office for Students as “high cost” teaching areas in higher education.

One of five rates, ranging from £130 to £220 per month, would be applied to each of the IfATE’s 15 apprenticeship routes. 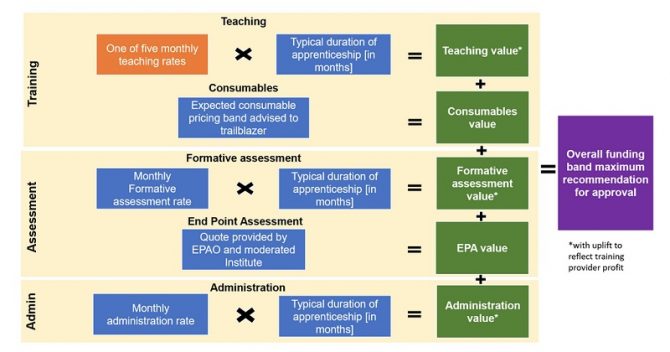 The IfATE states that the benefits of this option are a “completely automated and transparent process” which “better reflects the variation between costs than the core model”.

However, the institute added, this weighting “wouldn’t be sufficiently flexible to respond to costs which are unusual for a sector”, so some funding bands could still come out higher or lower than the current band.

The IFF’s research found that, on average, contact time with apprentices was split approximately 90 per cent in group teaching and 10 per cent in one-to-one settings. It also found that when apprentices were taught in groups, the average class size was 12. The £130 per calendar month rate, in the core model, is based on these averages.

If a trailblazer group considers that, for their apprenticeship standard, this value would be “insufficient” and teaching would need to be delivered differently to this ratio, and they could provide evidence to support this, then then their teaching costs value would increase.

And similarly, if employers consider that consumables for their apprenticeship standard are typically unusually high for their route, their cost could increase as long as sufficient evidence is supplied and signed off by the IfATE.

The trailblazer group would need to provide an itemised list of consumables required per apprentice and their cost as the evidence. 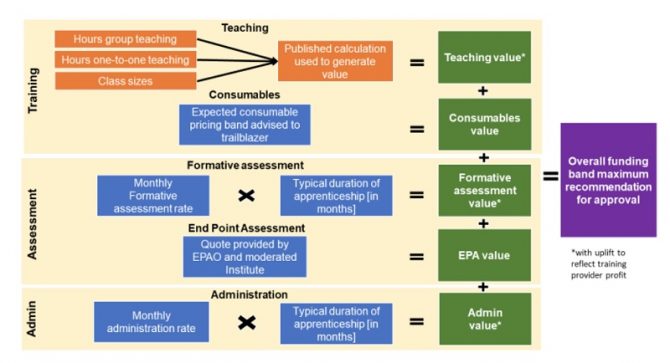