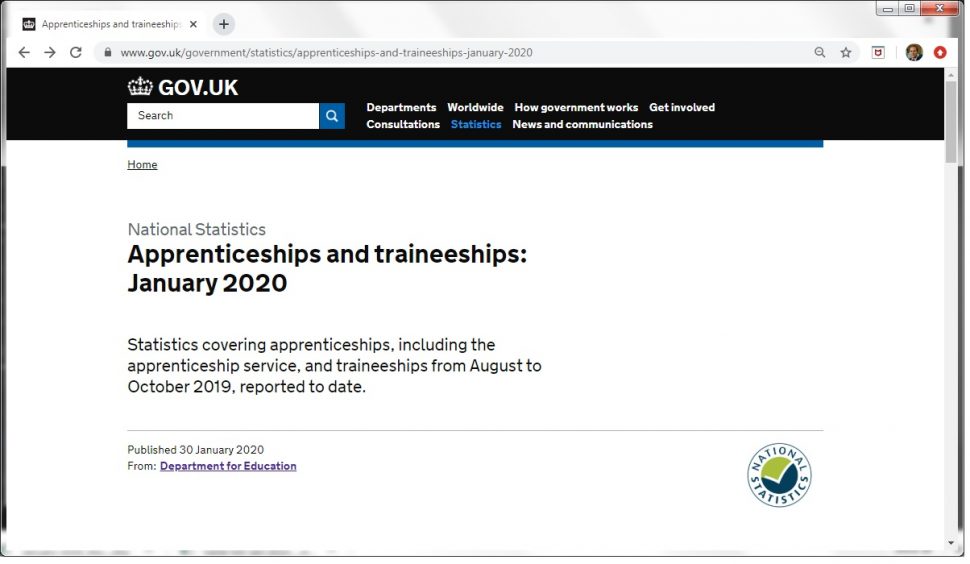 The number of apprenticeship starts in England crashed by nearly 20 percent in November, according to government figures published this morning.

Starts fell just four percent between August and October, but provisional figures for November when compared to the same publication last January reveal a fall of 5,200 (18 percent) in a single month.

The analysis by FE Week (see below) shows starts for those under the age of 19 fell the most, by 22 percent.

Level two saw the largest percentage decrease in November, with a 26 percent fall, part of a 21 percent overall reduction since August 2019.

Association of Employment and Learning Providers chief executive Mark Dawe said: “The fall in young people starting apprenticeships by nearly a quarter since the levy was introduced has been catastrophic for the communities that the government is promising to level up.

“The lack of apprenticeship funding for smaller businesses is largely behind this because it is they who traditionally recruit from the younger age groups.

“The chancellor needs to sort this out and review the mistaken removal of financial incentives for offering places on the programme for 16 to 18 year olds.”

Shadow skills minister Emma Hardy added: “By failing to tackle the declining number of L2/L3 apprenticeships, especially in SMEs, the government are denying the opportunities and progression for young people.

“This needs to be addressed urgently in the upcoming budget.”

By failing to tackle the declining number of L2/L3 apprenticeships, especially in SMEs, the government are denying the opportunities and progression for young people. This needs to be addressed urgently in the upcoming budget. https://t.co/vyWLO8khQT

A Department for Education spokesperson said: “We are investing significantly to level up skills and opportunity across the country and apprenticeships are playing a key role in this.

“Our higher quality apprenticeships have been designed with employers of all sizes so apprentices can learn the skills they need to go on to have successful careers and businesses can build the workforce they need for the future.

“We recognise there is more work to do and we are continuing to look at how the apprenticeship programme can best support the changing needs of businesses so more people can get ahead and all employers can benefit.”