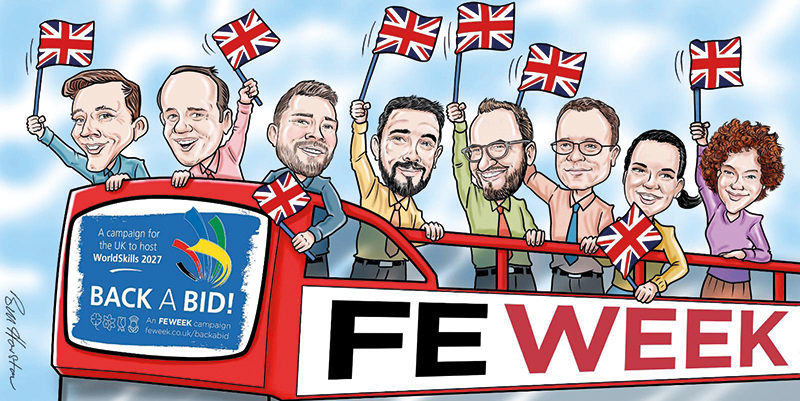 Education secretary Gavin Williamson has applauded the UK’s ambition to host an upcoming WorldSkills competition – and is encouraging the sector to back a bid.

His remarks come as FE Week launches its ‘Back A Bid’ campaign to prove there is sufficient interest in hosting the competition, affectionately known as the ‘Skills Olympics’, in 2027.

It follows on from WorldSkills UK “exploring” whether to bid to host the competition, as outlined by the organisation’s chief executive Neil Bentley-Gockmann in an interview with FE Week earlier this month.

Williamson said the competition “is a fantastic way to showcase the very best young talent from across the country,” and he “applauds WorldSkills UK’s ambition to host a future WorldSkills competition here in the UK”.

“I look forward to hearing the extent of support for this from the sector.”

FE Week kicked off its campaign with a call by Shane Mann, managing director of FE Week’s publisher Lsect, for the sector to “unite behind reinvesting in WorldSkills UK and a bold vision for their next decade”.

Mann said holding the international skills tournament here would “be an amazing opportunity for our sector and the UK to play host to the global skills community”.

Shadow FE minister Emma Hardy has offered her full support, as she says the WorldSkills competition “is a wonderful opportunity for young people to highlight their skills and talents on the world stage”.

“I’ve seen the transformation in young people’s confidence and employability after developing skills and being chosen to represent their country.”

The chief executive of the Institute for Apprenticeships and Technical Education Jennifer Coupland said her government quango also “backs the bid”.

She would find it “incredibly exciting” to host WorldSkills 2027, because of the chance to “showcase the fantastic skills we have in this country” and “really energise young people and training providers to hit the highest standards”.

The possibility of hosting has already attracted support from sector organisations like the Association of Employment and Learning Providers, with chief executive Mark Dawe saying “now” is the right time to bring the competition back to the country, after it previously came to London in 2011.

But Dawe, who also sits on the WorldSkills UK board, said this time “it would be great if we could mount a bid for a city other than London”.

“Fantastic” was how Association of Colleges president Steve Frampton described bringing WorldSkills back to the UK “as part of a very strong signal we are serious as a nation about being a world leader”.

“If the UK is to be a world leader in skills at all levels, this is exactly the sort of thing, alongside wider plans, that will be key to tackling the employment challenges of the future”.

It is not just sector organisations which can back the bid: FE Week readers are being encouraged to show their support at FEWeek.co.uk/BackABid and on social media using #BackABid.