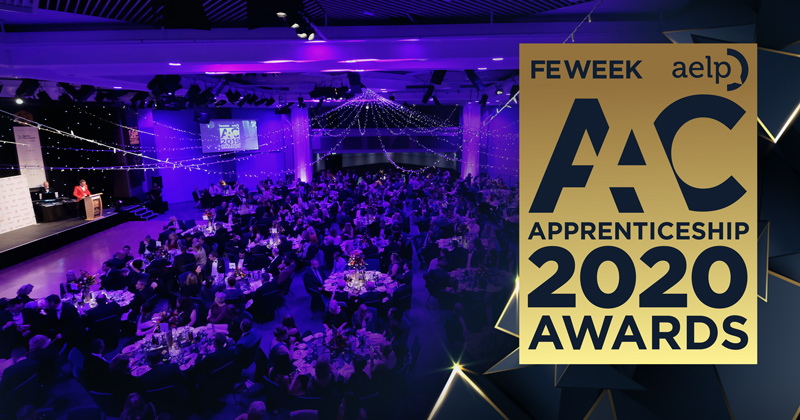 The national finalists of the 2020 AAC Apprenticeship Awards have been announced.

Forty-four organisations and individuals have been shortlisted in 22 categories after more than 350 entries were submitted by colleges, training providers and employers.

The awards were first launched in 2017 by FE Week and the Association of Education and Learning Providers (AELP).

Managing director of FE Week publisher Lsect Shane Mann said: “Nominations were up by 20 per cent this year, which is great and shows there is a real appreciation across the sector for celebrating individuals and organisations.

He said the judging panel, which included representatives such as CocaCola’s Sharon Blyfield and chair of the Apprenticeship Ambassador Network Jason Holt, found it “incredibly tough” to decide the finalists.

“What is great to see is just how much amazing stuff is taking place, which is a real privilege,” Mann added.

The winners will be announced at an awards ceremony during the Annual Apprenticeship Conference gala dinner on March 3 at the ICC in Birmingham.

Those shortlisted will also be invited to attend a special celebratory reception at the Houses of Parliament, hosted by education select committee chair Robert Halfon, on February 5.

On this year’s awards, AELP chief executive Mark Dawe said: “Not only has the quantity of entries increased but there has been a step change in quality of the submissions.

“More importantly I was bowled over by the inspiring work performed across the sector every day.

“It was a lovely reminder of why I do what I do and the impact our sector has in communities and businesses across the country, across every sector at all levels of learning.”

The deadline for applications for the 2020 awards was extended last month due to demand.

There are two types of awards: Route Apprenticeship Provider of the Year and National Awards.

The former will celebrate excellence in 15 individual apprenticeship routes, and winners will be named “apprenticeship provider of the year”.

For these awards, judges were looking for high levels of engagement with employers and apprentices, sustained commitment to working with employers in the sector, how provision adapts to meet employer requirements and evidence of high levels of learner retention, progression, positive outcomes, high-quality teaching and tutoring.

Entries were accepted from employers, providers and individuals involved in the development or delivery of recognised apprenticeships in the UK, including both frameworks and standards.

Last year, in the second edition of the event, several new categories were introduced and have been maintained this year, including an award to recognise employers and providers’ work with SEND apprentices and to increase diversity.

More than 500 people attended the event in 2019 and the winners included the Royal Air Force, which took home apprentice employer or the year, InComm Training, which was awarded apprentice provider of the year, and AELP chair Martin Dunford, who won the lifetime achievement prize.

The awards are part of the sixth Annual Apprenticeship Conference, which is held in partnership with the Department for Education, on March 2 and 3.

Across the two days, more than 1,250 delegates will be in attendance, with over 60 workshops, plus keynote speeches from Ofsted chief inspector Amanda Spielman, chief regulator of Ofqual Sally Collier, conference chair and broadcaster Kirsty Wark and much more.

The national finalists of the 2020 AAC Apprenticeship Awards are listed below. 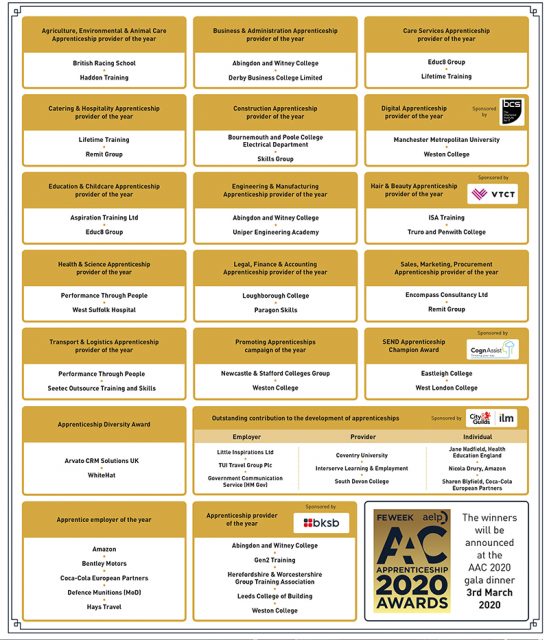