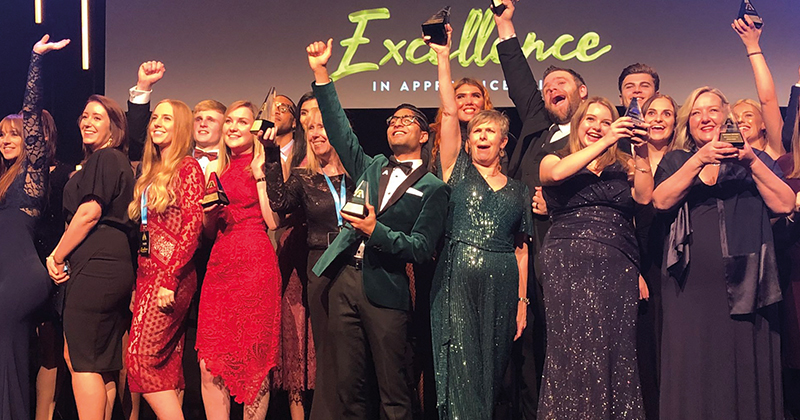 The “outstanding” work of apprentices, government officials and employers was recognised at the National Apprenticeship Awards for 2019 on Wednesday.

The great and the good of the FE sector turned out for the glittering awards ceremony in London, which was hosted by TV presenter and actor Reggie Yates.

These awards followed on from this year’s regional prizes, which all the national finalists had won.

Media outlets including FE Week were unable to attend the awards following the general election announcement and the onset of the pre-election embargo period, otherwise known as purdah.

FE Week nevertheless used its sources to get the inside scoop on proceedings.

Speaking at the ceremony, the 2017 winner of higher or degree apprentice of the year Charlotte Hughes said: “Everyone in this room knows it’s really easy to say ‘that’s just my day job, that’s what I’m meant to be doing’.”

But Hughes, who is chair of the East of England Young Apprenticeship Ambassador Network, said “everyone here is doing outstanding work to such an amazing standard and that’s what we’re here to celebrate”.

Charlotte Hughes on winning Higher & Degree #Apprentice of the Year 2017: “The award gave me exposure inside and outside of @GSK, I think one of the best things it did for me was increase my belief in my abilities and the value of my work” #AppAwards19 @EofEYAAN pic.twitter.com/CTrxqT7mDb

It was a good night for the young apprenticeship ambassador network: North West Young Apprentice Ambassador Emilia Hoyle from Heat Trace Ltd picked up the award for rising star of the year.

At just 23, Hoyle has been promoted to be marketing manager for Heat Trace and completed a higher business administration apprenticeship and is now studying for a chartered manager apprenticeship.

The Hertfordshire chair of the network’s East of England branch, Tatiana Peters from arms manufacturer MBDA, won the award for the level three apprentice of the year.

Dominique Unsworth from Resource Productions, who was named as a government SME ambassador in 2017, won this year’s apprenticeship champion of the year.

She won the South East apprentice champion of the year in September for her work with six local authority officers and adult learning providers to raise awareness and engagement with apprenticeships.

Louise Meredith from JC Bamford Excavators Ltd (more popularly known as JCB) was recognised as the level-four and above apprentice of the year and the level-two award was won by Julie Mills from Northumberland Community Bank.

Mills began a customer services apprenticeship with Northumberland County Council’s learning and skills service while at the bank after working in a factory for 20 years.

After winning the North East intermediate apprentice of the year award, Mills said she had “never even done any office work before and didn’t realise that older people could do an apprenticeship.”

The audience saved their most rapturous reaction for Sue Husband, director of employer and employee engagement for the Education and Skills Funding Agency: she received a standing ovation when she went to pick up her special recognition award.