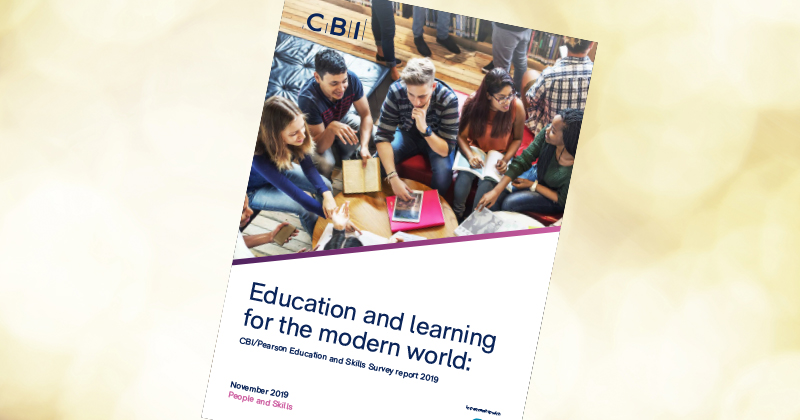 The Confederation of British Industry has urged the government not to restrict how the apprenticeship levy is spent in the face of opposition from nearly eight in ten businesses.

Limits on age, income or level of training would make 78 per cent of 208 businesses and trade associations surveyed for the 2019 CBI and Pearson Education and Skills Annual Report either “dissatisfied” or “very dissatisfied”.

“Restrictions on how levy funds can be used could be counter-productive to addressing some of the biggest skills challenges employers face,” the report said.

“These include new technology, such as automation and AI in the workplace, which means that retraining and upskilling is more important than ever.”

Such restrictions have been mooted after projections from the Institute for Apprenticeships and Technical Education showed the levy could be overspent by up to £1.5 billion in 2021/22.

This has been blamed by the CBI on a growth in higher-level programmes, which are longer and more costly to deliver, and on the levy having to cover the cost of non-levy payers’ provision.

Even the fund for non-levy provision is running dry, according to the Association of Employment and Learning Providers (AELP), which has found providers were having to turn apprentices away as a result.

The CBI suggests that, instead of restrictions, the government should “deliver a sustainable financial plan for the apprenticeship budget that allows firms to continue to invest in apprentices of all ages and levels”.

AELP chief executive Mark Dawe said his organisation “strongly supports” the CBI’s suggestion as a new plan “will remove the fear of further restrictions on employers’ use of the funding”.

The AELP proposed its own solution to the overspend this year, which would remove level six and seven apprenticeships from the scope for levy funding.

Former skills minister Anne Milton said in June that a pre-apprenticeship salary limit was “one of the most palatable” options for restricting how businesses can use the levy.

But Department for Education permanent secretary Jonathan Slater admitted to the Education Select Committee that “hard choices” had to be made about the apprenticeship budget.

This was after the National Audit Office reported the long-term financial sustainability of the apprenticeship programme was “at risk” because the average cost of training an apprentice soared to double what the government predicted.

In addition to concerns about restrictions in how they can spend money, 59 per cent of businesses cited a lack of funding as a barrier to training.

But sparing time for employees to train was cited as a problem by 52 per cent of respondents, amid a crackdown by the government and Ofsted on off-the-job training.

The CBI believes there ought to be a consultation on turning the levy into a flexible skills levy, which Dawe welcomed, as the argument for more flexibility under the levy “needs to be taken far more seriously”.

He proposed that this flexibility should be introduced through the apprenticeship standards “ensuring that they have the correct blend of on and off-the-job training appropriate to level, sector and setting”.

Speaking to FE Week this week (see page 8), education secretary Gavin Williamson said making sure that the levy is “properly funded” and satisfies the needs of industry was “critical” and “it will be part of the discussion on the spending review”.