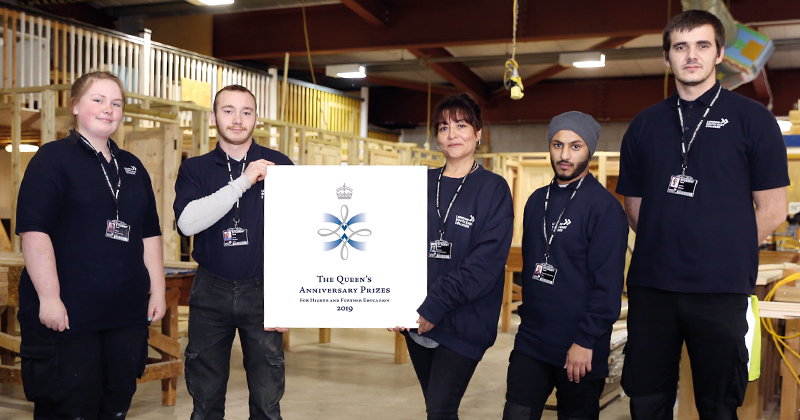 Three FE colleges in England have been announced as winners of the Queen’s Anniversary Prizes for 2018-2020 in a ceremony at St James’s Palace.

London South East Colleges, Dudley College of Technology and Tyne Coast College were among the 22 education providers recognised in the awards. They were recommended by the prime minister and approved by the Queen.

The prizes will be officially presented by a senior member of the Royal Family in a ceremony at Buckingham Palace in February.

“It’s also fantastic to be representing FE, showcasing some of the pioneering and innovative work that is taking place in our incredible, yet often overlooked, sector.”

London South East Colleges, based in Bromley, was chosen in recognition of the technical and vocational education on offer, including its “pioneering” of a strategic engagement programme within the construction industry.

Tyne Coast College, created from a merger of South Tyneside College and Tyne Metropolitan College, was chosen for creating digital scenarios that allow naval architects to design and implement projects at the South Shields Marine School.

Principal John Roach said: “Our 3D modelling team is in a field of its own in the UK in the expertise it has developed over the past two decades, and its achievements should be celebrated.

“We are known throughout the world for the strength of our maritime training, but this award gives us the global recognition we deserve in another field entirely.”

Dudley College of Technology, the largest provider of advanced vocational and technical education and apprenticeships in the West Midlands, was awarded the prize for “contributing to the economy of the region”.

The college’s chief executive Lowell Williams said: “I see this honour as recognition that further education can be the driver for economic regeneration, particularly of struggling towns in areas of the country that have been left behind by the under investment of successive governments, over many years.

“We never gave up on our vision. We took investment risks. And we always believed in the transformative power of further education. It goes to show so much can be achieved by so many people working together in one place for the good of that place.”

A total of 275 prizes have been awarded to 49 further education colleges and 98 universities since the awards were created in 1993. They are granted every two years.

The only other college to win an award outside of England was Belfast Metropolitan College.

Sir Damon Buffini, chair of the Royal Anniversary Trust, which manages the prizes, said: “Colleges and universities throughout the UK do exceptional work year after year that delivers benefits well beyond the institution – positively affecting education, the economy and wider society in many different ways.

“The criteria are demanding, and competition is strong; it is a great incentive to our colleges and universities to think critically about the direction of their work and its application and relevance in today’s world.”

The 22 award-winning UK further and higher education institutions were recognised this time for “ground-breaking work and pioneering research” in a range of disciplines including science, engineering, education, the humanities, the environment and medicine.

Entries to the scheme are invited in any subject area and are subject to assessment in a process managed by the Royal Anniversary Trust, an independent charity.